Character, Nature and Attributes of God – 2

*Pastor’s Note: These lessons will be Scripture “heavy,” and though I am forewarning you I cannot apologize because it is the Word of God that brings things into the light. Remember that the Word says in the mouth of two or three witnesses, let everything be established. This is a spiritual principle that applies to the Word as well. (Matthew 18:16, 2 Corinthians 13:1). Also because of the need to explain, the lessons will have to be divided up into parts.

Last time we covered a bit on Omniscience, God’s ability AND nature of knowing all things there is to know, so this time we will begin by moving on with Omnipotence. 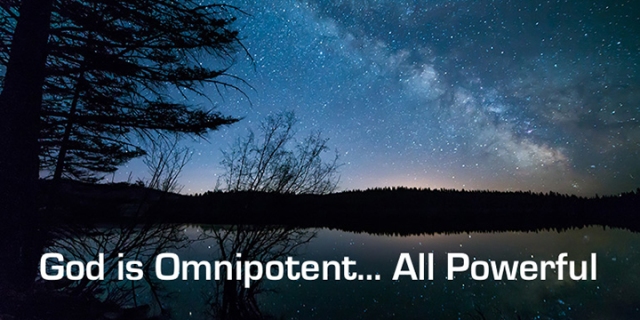 OMNIPOTENCE: By Omnipotence is meant that God has unlimited authority and is all-powerful. It is absolute and unlimited. He is supreme in sovereignty and has divine right over everything He has created. God’s power and authority have no boundaries. He can bring to pass everything and anything that He desires.

The following gives us some examples:

Then God said, “Let there be light”; and there was light. And God saw the light, that it was good; and God divided the light from the darkness. – Genesis 1:3-4.

Then Job answered the LORD and said: “I know that You can do everything, And that no purpose of Yours can be withheld from You.” – Job 42:1-2.

“Those who go down to the sea in ships, Who do business on great waters, They see the works of the LORD, And His wonders in the deep. For He commands and raises the stormy wind, Which lifts up the waves of the sea. They mount up to the heavens, They go down again to the depths; Their soul melts because of trouble. They reel to and fro, and stagger like a drunken man, And are at their wits’ end. Then they cry out to the LORD in their trouble, And He brings them out of their distresses. He calms the storm, So that its waves are still. Then they are glad because they are quiet; So He guides them to their desired haven.” – Psalm 107:23-30.

“‘Ah, Lord GOD! Behold, You have made the heavens and the earth by Your great power and outstretched arm. There is nothing too hard for You.” – Jeremiah 32:17.

And at the end of the time I, Nebuchadnezzar, lifted my eyes to heaven, and my understanding returned to me; and I blessed the Most High and praised and honored Him who lives forever: For His dominion is an everlasting dominion, And His kingdom is from generation to generation. All the inhabitants of the earth are reputed as nothing; He does according to His will in the army of heaven And among the inhabitants of the earth. No one can restrain His hand Or say to Him, “What have You done?” – Daniel 4:34-35.

“And do not think to say to yourselves, ‘We have Abraham as our father.’ For I say to you that God is able to raise up children to Abraham from these stones.” – Matthew 3:9.

“But Jesus looked at them and said to them, “With men this is impossible, but with God all things are possible.” – Matthew 19:26.

Again, scripture is full of examples of His unlimited power and what’s listed above is not an exhausted list. Everything in His creation is under His control, absolutely, therefore everything period, is under His control. Even Jesus’ disciples marveled at the Son of God’s power that was demonstrated by the Lord’s examples. Also, David and the other psalmists speak of those who have witnessed first hand God’s mighty and absolute power. The New Testament writers understood very well this concept of unlimited and absolute authority and power. In one of the Scriptures listed above James states that it is sheer arrogance and evil to say other than what he wrote in the verse, knowing that our lives are fleeting and in the hands of the Lord. Even the great king Nebuchadnezzar of the Old Testament in Daniel’s time, knew this of God, Almighty, as noted in the verse above. Even Satan, the very enemy of our souls, is STILL subject to God’s authority as evidenced in Job 1:12, and 2:6, where Satan had to get permission to afflict God’s servant. So he didn’t have the power OR the authority to afflict Job without God’s permission. This should be a very strong lesson to us today!

His, the devil’s, final outcome is in God’s hand and has been all along as witnessed in the Book of Revelation. As it’s been said many times, sometimes in jest but definitely the truth, we KNOW Who wins the fight!

“He laid hold of the dragon, that serpent of old, who is the Devil and Satan, and bound him for a thousand years; and he cast him into the bottomless pit, and shut him up, and set a seal on him, so that he should deceive the nations no more till the thousand years were finished. But after these things he must be released for a little while.” – Revelation 20:2-3.

“The devil, who deceived them, was cast into the lake of fire and brimstone where the beast and the false prophet are. And they will be tormented day and night forever and ever.” – Revelation 20:10.

Man himself, in his relentless arrogance and pride is constantly searching for more power and authority. Mankind wants it though so they can use it to rise above their fellow man. Only then can they feel like they possess some semblance of power. Real power and real authority can only come as a result of our relationship with the One Who in actuality IS true power and authority, the God of all creation. Without this aspect of His nature, just like Omniscience, He wouldn’t be God. It isn’t just what He is capable of, it is part of Who He IS.

Part Three will start with the attribute of Omnipresence.