Be Diligent, An Excerpt – Alexander MacLaren

Alexander MacLaren (February 11, 1826 – May 5, 1910) was an English non-conformist minister of Scottish origin. This Scottish preacher was known as the ‘Prince of Expositors’ and “the supreme example of the Protestant expository preacher.” He was born in Glasgow, Scotland, the son of a merchant and lay preacher. The family moved to Edinburgh, where as a 12 year old, MacLaren accepted Christ and was publicly baptized. He was educated at Glasgow University and Stepney College, a Baptist college in London. He became thoroughly grounded in Greek and Hebrew and learned to study the Bible in the original languages. This laid the foundation for his distinctive work as an expositor and for the biblical content of his preaching. He became a much sought after preacher and accepted the pastorate at Union Chapel in Manchester in 1858. He was the pastor there for 45 years until 1903. After this he continued to preach and study the Word endeavoring to never veer from the path of historic truths.

‘Wherefore, beloved, seeing that ye look for such things, be diligent that ye
may be found of Him in peace, without spot, and blameless.’ — 2 Peter 3:14.

Peter is fond of using the word which is here translated ‘be diligent.’ Hard work, honest effort, continuous and persevering, is His simple recipe for all nobleness. You will find He employs it, for instance, at least three times in this letter, in such connections as, ‘Besides this, giving all diligence, add to your faith virtue,’ and so on through the whole glorious series; and again, ‘Wherefore the rather, brethren, give diligence to make your calling and election sure.’ So, then, there is no mystery about the way of securing the aim; work towards it, and you will get it.

Now, of course, there are a great many other considerations to be brought in in reference to the Christian man’s means of becoming Christlike. We should have to speak of the gifts of a Divine Spirit, of the dependence upon God for it, and the like; but for the present purpose we may confine ourselves to Peter’s own prescription, ‘be diligent,’ and that will secure it. But then the word itself opens out into further meanings than that. It not only implies diligence: there may be diligence of a very mechanical and ineffective sort. The word also includes in its meaning earnestness, and it very frequently includes that which is the ordinary consequence of earnestness — viz., haste and economy of time.

I would say, lastly, Make haste about cultivating a Christlike character. The harvest is great, the toil is heavy, the sun is drawing to the west, the evening shadows are very long with some of us, the reckoning is at hand, and the Master waits to count your sheaves. There is no time to lose, brother; set about it as you have never done before, and say, ‘This one thing I do.’

And so let us not fill our minds with vain hopes which, whether they be fulfilled or not, will not satisfy us, but lift our eyes to and stay our anticipations on those glories beyond, as real as God is real, and as certain as His word is true. Let these hopes concentrate and define for us the aims of our life; and let the aims, clearly accepted and recognized, be pursued with earnestness, with ‘diligence,’ with haste, with the enthusiasm of which they, and they only, are worthy. Let us listen to our Master, ‘I must work the works of Him that sent Me while it is day; the night cometh.’ And let us listen to the words of the servant, which reverse the metaphor, and teach the same lessen in a trumpet call which anticipates the dawn and rouses the sleeping soldiers: ‘The night is far spent, the day is at hand. Let us cast off the works of darkness and put on the armor of light.’ 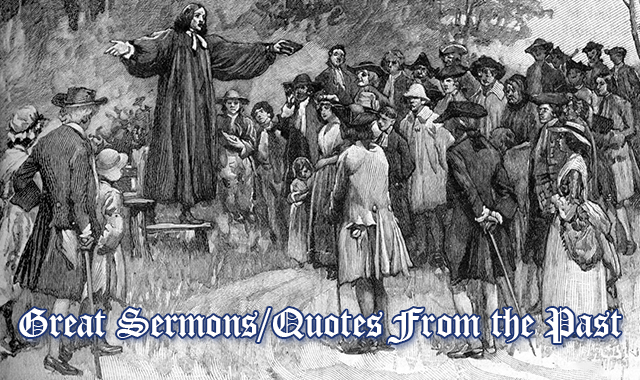