When God Reveals The Truth

Daniel 2:47, The king answered Daniel and said, “Surely your God is a God of gods and a Lord of kings and a revealer of mysteries, since you have been able to reveal this mystery.” (NASB).

My wife and I, as many others in the Body of Christ, have been praying for quite some time now, years in fact, that God would continue to bring to light those things that have been hidden and done in the dark.

Now when we started, we had some very specific things in mind, but as the last few years have progressed we have seen the Hand of God moving in the world around us and within our Nation. Many, many things that have been done in secret ARE coming out in the light and it’s obvious things are stirring for even more things to be revealed.

Corruption, wickedness and blatant evil have no place to hide any more, now that God’s children have been fervently praying for a move of God. This is what my wife and I were discussing just this morning during prayer and Bible reading.

What I want to share briefly with my brothers and sisters in Christ is something the enemy would like to create for us to either remain blind or to stumble concerning the truth of God’s Hands and control in the world today.

James wrote this in his letter to the church as the Holy Spirit inspired him; “You believe that there is one God. You do well. Even the demons believe–and tremble!” – James 2:19. In other words, the demons believe the truth of God, but they still reject Him. So it is with many people concerning the truth.

God has promised that His children would not walk in the dark, but as we walk in the Spirit, we are walking in the Light of Christ. In many of Jesus’ prayers for His disciples, both then and now, He prayed that we would not be deceived nor taken in by the evil and deceit we would face. That is a promise that the Holy Spirit is revealing every day to those that “have eyes to see and ears to hear!” (Isaiah 6:9, Ezekiel 12:2, Matthew 13:13-14).

If you have been “practicing” walking in the Spirit, then you know the importance that the gift of discernment plays in the lives of believers. There are many things in this day and age that are being told us, all of us, and much of it is not true; and yet, the truth is NOT hid from God’s children!

However, here is the crux of the matter. We can be given the truth and that truth though it cannot, in the deepest recesses of the heart be denied, truth CAN be and often times IS rejected. The demons in James writing are a perfect case in point. So are those that reject the Gospel and Good News of Christ Jesus free gift of salvation. The truth can’t be denied no matter how hard a person tries, but it can and often is rejected.

This is the very stumbling block that the enemy would love to see us stumble over. The blind leading the blind as Matthew wrote in his Gospel account. (Matthew 15:14). It is not just the world and those enamored with it that we have to contend with; it is also the religious who have their own agendas and motives, just like when Jesus walked the earth. This is why there is such a big difference, an eternal difference, if the truth be known, between the religious and those walking in the Spirit. The Spirit leads to life and that more abundantly. The religious have a form of godliness, but no power to display. (2 Timothy 3:5). 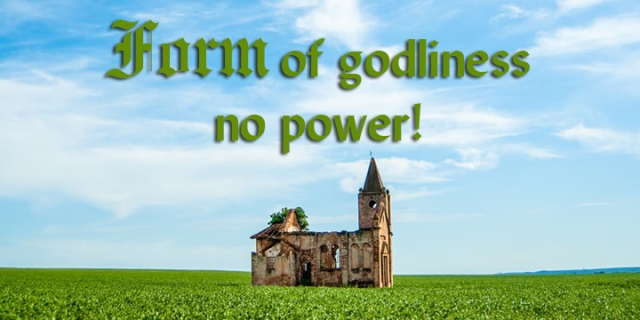 The religious leaders of Jesus’ day were witness to the TRUTH of the Word through the evident display of miracles, signs and wonders. Yet they still rejected the truth though they couldn’t deny the fact of the truth in front of their eyes.

We have many today that believe the miracles have ceased and yet today, I see miracles all around that are on a greater scale. Just because you don’t see in the natural hands healed, blinded eyes open (and I’m not saying this isn’t happening still in some places), but that is in the natural and Christ Jesus came to give us ETERNAL life and that more abundantly!

I see spiritually blinded eyes opened all the time, eyes that the devil darkened, and ears that are able to hear the truth of the Word of God and thus grow in faith. I see, the lame, those not able to walk in a coherent line, being transformed and able to walk in the Spirit. Now THOSE are eternal miracles! Those are the miracles of stony hearts turned back into flesh! Those hearts won’t die as those in the natural will, for these hearts have been raised from the dead!

Remember what the Apostle Paul wrote in his second letter to the Corinthians:

Those that are healed in the natural are still going to suffer a natural death, but NOT so those who have been reborn, brought back from SPIRITUAL death! Yes, it’s all a matter of perspective; I know what you’re thinking, but isn’t a born-again follower of Christ Jesus, one walking in the Spirit of Christ, isn’t that person’s perspective supposed to be on the eternal?

My father-in-law used to always say, don’t believe everything you hear or read and only a portion of what you see. Wow! This is even more true today with all the ability for special effects and wizardry available within all the forms of media. The thing a true Christian has though is the Holy Spirit, giving them discernment and leading them in the paths that the Lord delights in. God’s children do not have to stumble as if in the dark. We don’t have to take all that the world is trying to throw our way as the ultimate truth, for we serve the God Who IS truth!

My whole attempt for putting this forth today is to give my brothers and sisters in Christ some things to think and meditate on. If you are perplexed by the goings on in the world and nation around you, you don’t have to be in the least. Remember, confusion is the devil’s trickery. It is his age-old tool and if he keep you confused, you can lose sight of the Truth that is leading you. The Holy Spirit is our gift from the Father through Christ Jesus. He WILL lead you into all truth (John 16:13), and that truth WILL set you free! (John 8:32).

In closing, remember this; we have NOTHING whatsoever to fear from the world or from man when we are a true follower of Jesus Christ. We have His Holy Spirit within us giving us direction, if we listen, and He will NEVER lead us other than where the Father wants us to go.