“For we were saved in this hope, but hope that is seen is not hope; for why does one still hope for what he sees? But if we hope for what we do not see, we eagerly wait for it with perseverance.” – Romans 8:24-25.

Now, before you get the wrong idea, this is not about my cancer or treatment, though in truth it is only one of the things that we ALL face in our day to day lives. 2020 has given the world a real wake up call and with the earth groaning as well as the people of the world, it is time to take stock of our corporate vision, especially as the Church, the Body of Christ.

Many of you who follow me, already know my teaching on the differences between mere believing and an eternal faith. It is a stage, a level of difference that MUST start with believing but also must mature into actual, spiritual working faith.

In essence, this lesson is going to be on vision, on sight, on what you see and perceive and what you NEED to KNOW as truth! 2020 has caused many of you, my loved ones and friends to have to exercise and practice your faith in the Lord, God Almighty. All over the world, hurricanes, typhoons, cyclones, earthquakes galore in places rarely known to have them. Devastating forest fires requiring major evacuations with homes utterly destroyed. We have witnessed and are in the midst of the worst corruption probably since the days of Noah. It is blossomed in our Nation and in other countries of the world and it is not hiding in the dark anymore! Yet, for those of you who ARE children of the Living God, you have seen His hand displayed in your lives and are able to move forward with renewed hope and promise. This doesn’t mean there isn’t pain or agony, but the spiritual hope overcomes the natural pain and allows us to move forward in the Holy Spirit. 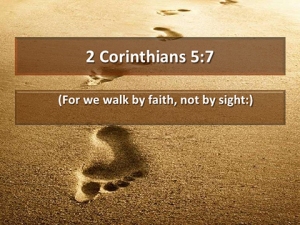 The best statement, one of the best Scripture verses ever penned is by the Apostle Paul under the inspiration of the Holy Spirit. “For we walk by faith, not by sight.” This is a short yet utterly profound statement and you can meditate and think on this for a long time, over and over again. NOT sight! Something much, much greater. Sight is a natural sense given to man to perceive what he is looking at; yet at the same time, it is a weaker sense, for you can not always rely on what you see, and in essence there are things that you do not, or will not be able to see with only your natural sight!

This is why spiritual renewal, spiritual rebirth is so important. We are NOT JUST natural, carnal creations. We were created of the stuff of stars, the earth, yet we became LIVING beings when God Almighty breathed within us the breath of His life! (Genesis 2:7).

We became part of the earth, but we were always meant to be a part of God, our Heavenly Father. It was only sin that separated us from Him on a spiritual basis and yet, to assure man his free will to love God truly and sincerely, and knowing fully well ahead of time that man would sin, the Father had a plan, an awesome, extremely wise plan that would allow man to come back into the spiritual relationship that God desired of His created children! With that relationship would also come the ability to transcend the lower carnal and natural senses and rise into the benefits of the more supreme spiritual senses.

So, what do YOU see going on around you? Do you see only the chaos, troubles, corruption and earthly destruction or are you also able to see the workings going on behind what your natural eyes see? We HAVE been given a road-map, a guidebook as it were, the Holy Bible. Each day, each week that goes by, we see more and more things opening up within the Holy Book that we might not have identified in the past because the timing just wasn’t there yet. But God, as our Father and Teacher has left us with knowledge and instruction and has promised that as we get closer to His planned end of natural time, our knowledge, both natural AND spiritual would increase and be revealed. If you read and meditate on His Word, you will notice that we are right in the midst of that even now! 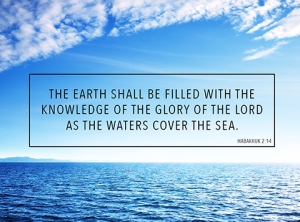 We all know the famous Scripture of Daniel 12:4 where the Angel told Daniel, “But you, Daniel, shut up the words, and seal the book until the time of the end; many shall run to and fro, and knowledge shall increase.” This describes knowledge in general, but it also confirms what Isaiah wrote concerning spiritual knowledge as found in the passages of Habakkuk and Isaiah, especially the last part of verse 9 of Isaiah, “For the earth shall be full of the knowledge of the LORD As the waters cover the sea.” (Isaiah 11:9b, Habakkuk 2:14).

What do YOU see? Are you looking only with your natural eyesight or are you seeing the spiritual depth behind what your eyes tell you? I want to share with you a dream my youngest adult son shared just about a week ago concerning what is going on in our nation and as he prayed, he asked the Lord about some of what was evident to all and how was He the Lord going to work it out.

Jason had been reading the Word and praying and as many of us have done, he asked the Lord some “whys, and how” when it came to the Lord’s hand and especially in the National crisis the U.S. is facing at this present time. This also goes hand in hand with all the other things that the year 2020 has dropped in our laps, so to speak.

What Jason said the Lord showed him was an old console television set with the 4×3 picture instead of the fancy ones we watch today. On the screen, he could see the corruption and lies, the chaos, not just in the Nation but in the world. He saw fires, earthquakes, hurricanes, lives torn asunder and politicians and media moguls making obvious misleading statements. He acknowledged to the Lord, that yes he did see that, but, Lord, “where are you?”

The Lord spoke to his heart and told him, you are seeing what the world wants you to see but the picture you are seeing is on very minute part of what is going on in the whole world. Jason stated that the next thing that happened is that the sides, top and bottom and DEPTH of the picture grew larger and larger in his eyesight until the portion that had appeared on the screen was no more than a pinpoint. Jason said it was like looking at a little island surrounded by a vast ocean of activity.

Then he said the Lord started to clarify the surrounding edges that reached out beyond what seemed like and infinity and in the midst of all going on in the world, the Lord showed him multitude upon multitude of angels warring and fighting against demonic forces, fallen angels that were in possession of corrupt men’s lives and wills. The Lord showed him that what he was now seeing was NOT what the world wants man to see, but the Lord was revealing the truth of what is going on behind the veil of the natural. It effected him greatly and I reminded him of another account in the Word of God.

In the account found in 2 Kings, we see Elisha revealing a similar thing to one of the servants; “And when the servant of the man of God arose early and went out, there was an army, surrounding the city with horses and chariots. And his servant said to him, “Alas, my master! What shall we do?” So he answered, “Do not fear, for those who are with us are more than those who are with them.” And Elisha prayed, and said, “LORD, I pray, open his eyes that he may see.” Then the LORD opened the eyes of the young man, and he saw. And behold, the mountain was full of horses and chariots of fire all around Elisha.” – 2 Kings 6:15-17.

Anyone who has been walking with the Lord for a while will KNOW, not just believe, but actually KNOW that our Sovereign and Righteous God Almighty has NEVER left His Throne of His seat of power! We don’t always have to rely on what our eyesight is telling us in front of our eyes for our spirit WILL reveal to us the TRUTH of what is going on behind each and every circumstance.

God has a purpose and a plan and always had and it has always had a time-limit, an expiration date, as it were.

God’s plan has ALWAYS been to have a Creation that would love Him for Who He is and not just for what He can or will do for us. What He does for us is based on a spiritual Love, Agape, that transcends any mere natural love. He is also very well aware that some will accept that plan and His will to fulfill that and that many will reject it. Yet, we, as His children need to remember that His DESIRE is that none should perish and so as obedient and faithful children we should pray and love accordingly as well, desiring that none should perish even though knowing that some are going too by their own free will.

Times like this, when you KNOW what is going on behind the scenes in the natural are the perfect climate AND opportunity to present the Gospel of Love and Hope to not just those who may be lost right now, but also to those who are allowing the fears of what they see in front of them cause them doubt which hinders their ability to move from mere believing into the maturity of having a spiritually knowable faith.

As Christians, Brothers and Sisters who FOLLOW after Christ Jesus, we need to remember AND to remind ourselves that no matter our natural age or even how long we have been born-again or spiritually reborn, we are all on a personal and private journey led by the Holy Spirit within us. This is why it is so important, no, so VITAL to encourage one another and to sound out to one another the great blessed HOPE that we ALL have in Christ Jesus.

This lifestyle journey takes PRACTICE, it takes exercise, to remind ourselves sometimes daily that it isn’t always about what we see in front of us, but what we know to be truth behind what our natural eyesight tells us. We NEED to remind ourselves that no matter what WE desire an outcome to be, God is always and has always been in control to fulfill His plan for the ultimate Redemption of those He calls His sons and daughters, heirs with Christ Jesus!

In closing, do NOT lose hope, keep believing in the KNOWLEDGE that our God and Lord, our Heavenly Father is in total and absolute control! That is mature, spiritual faith that transcends, goes beyond, believing! 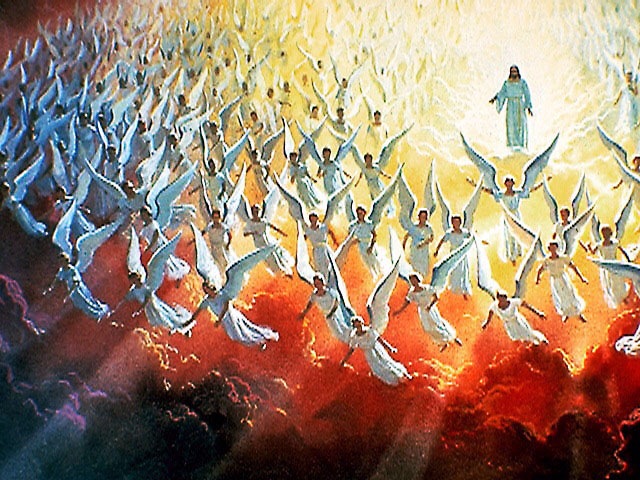 3 Responses to Faith Beyond Believing