Does It Still Apply?

*Pastor’s Note: I wrote this in the late 90s along with some other short articles for the Church section of the local newspaper where we lived in Globe, Arizona. I thought it might interest my readers and I HAVE updated some of the Scriptures references. All in all, it is pretty much as it was published in the Church editorial of the newspaper. The pictures were added for this posting.

In the first century, an emperor sent out a spy to view and analyze the fast growing sect known as “Christians.” With mixed reviews he came back and reported. But of all the things that he reported, one statement has survived the centuries. “Behold how they love one another.” That phrase is the one that has stayed in remembrance. That statement portrayed the first century church. In all honesty, could we say that today?

In the church today, love is sometimes lost in our disagreements and our doctrinal differences. The Bible states very concisely that we are to always love one another. Even in the early church there were disagreements, but the disagreements did not stand in the way of actively loving one another. 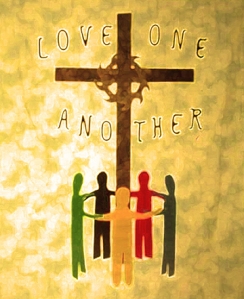 If you read 1 Corinthians 1:18-29, you will find reasons why they disagreed, but in 1 Corinthians 2:1-5, you will see Paul’s way through these divisions; “And I, brethren, when I came to you, did not come with excellence of speech or of wisdom declaring to you the testimony of God. For I determined not to know anything among you except Jesus Christ and Him crucified. I was with you in weakness, in fear, and in much trembling. And my speech and my preaching were not with persuasive words of human wisdom, but in demonstration of the Spirit and of power, that your faith should not be in the wisdom of men but in the power of God.”

In Acts 15:1-33 are examples of disagreements among the apostles and disciples, but also their resolution. The difference in the early church and the church of today is that then they came together and discussed their differences and then came to a mutual agreement, and only then did they walk away from one another, the Bible says, in peace. In other words, they made a determined effort to find a basis for mutual peace. In 1 Corinthians, Paul stated, “It was to know Christ and Him crucified.”

In today’s society, we just walk away from one another, period. If you don’t agree with me, we can’t fellowship. Sadly, that is giving non-Christians the wrong picture of Jesus Christ. We have to remember that if we are claiming to be a Christian, we are telling people that we are followers of Jesus Christ. We are striving to be Christ-like.

Would Jesus approve of our reflection of Him. We also need to note that in the Greek, the word Christ means, “Anointed One.” Christ was not Jesus’ last name, it denoted His character. He was God’s Anointed One. If we claim to be Christians, we are claiming to be God’s anointed ones following Jesus’ example.

Now we all stumble and make mistakes, but it’s not the once in awhile slip up that causes people to take notice, it’s the overall pattern of our lifestyles that people characterize. Even the world acknowledges that we all make mistakes. The difference with Christians is that we should try to live and love beyond our mistakes.

John states this well in 1 John 3:10, 11, 18; “In this the children of God and the children of the devil are manifest: Whoever does not practice righteousness is not of God, nor is he who does not love his brother. For this is the message that you heard from the beginning, that we should love one another.”

“My little children, let us not love in word or in tongue, but in deed and in truth.”

As you see, true love is action. Action is a matter of will, and action can transcend mistakes, even sin. 1 Peter 4:8, “And above all things have fervent love for one another, for “love will cover a multitude of sins.” We make mistakes, we actively forgive, then we actively demonstrate love. With this kind of love, even denominational barriers fall and the world sees us as true followers of Jesus, “The Anointed One.”