The Living Word – In The Beginning

Genesis 1:1-2, “In the beginning God created the heavens and the earth. The earth was without form, and void; and darkness was on the face of the deep. And the Spirit of God was hovering over the face of the waters.”

IN THE BEGINNING. What does your mind conjure up when you think of that simple statement? Have you given it any thought? Or, is it just a statement you read just to get to the next one that is bound to be so much more important and informative? What IS in the beginning?

Before I give you my take on this question, I’m going to come right out and say it; the BIBLE is MORE than just a book! How many of you have I lost or how many are in the process of turning the page to something else already?

Hebrews 4:12, “For the word of God is living and powerful, and sharper than any two-edged sword, piercing even to the division of soul and spirit, and of joints and marrow, and is a discerner of the thoughts and intents of the heart.”

So many can quote Hebrews 4:12 and if you are a continual reader of the Holy Bible, you have this verse memorized most likely. But WHAT is it saying to you? You may be reading the Word in book form, with real pages; maybe you read it on a tablet or computer screen, it is still words; right? But the writer of Hebrews tells us it is LIVING and POWERFUL and able to accomplish great things within our physical nature and our spiritual nature and even within the place between our spirit and soul or seat of character, what makes us who we are as compared to someone else! It can even KNOW our thoughts and intentions!

What other book, supposedly written by the hand of man or men can be said to do the same? How is this even possible?

You have to go back to THE BEGINNING! Have you given it thought yet? In the beginning denotes the start of something. The exact point when something, an event, a plan, a circumstance has a starting point!

Now I’m going to get into the specifics of the Character of God in the next post but for the time being we all know this or at least believe this, God is eternal, with neither a beginning nor an end. HE was NOT created, but always was and always will be. It’s hard to comprehend if you even try to spend time to comprehend because it is beyond us and that is where faith truly comes in. We can’t understand that aspect of God, nor comprehend it, we can only accept it as truth, IN faith!

Okay, with that foundation, we know that the “in the beginning” of the Scriptures is not about God, the Creator, it is also not about the Angels or any other creation outside of Genesis. But in Genesis 2:4-7, we see just who, “the beginning” is referenced too. You see, even though man is also eternal, man has a beginning point, a start of existence or being. We will live either with our Creator eternally, or apart from our Creator eternally depending upon our choice.

The Creation story, however you believe it took place “scientifically” is told from the perspective and for the sole purpose of letting mankind know that we had a starting point. This narrative, this story, this LIVING and POWERFUL Word, from beginning of the first page until the last is to show us God’s plan, from the very beginning, for mankind and for mankind’s future. It also shows us God’s Character (which we will delve into later), God’s relationship with mankind, Creator to Creation, but even more than that, His relationship as Creator Father to created sons and daughters.

Even though the first five books, the Pentateuch, of the Holy Bible are not the very first writings relating to our relationship with God Almighty, they ARE the foundation for the rest of the books of the Bible. But, I know what some of you are wondering; how can a man who came so many generations later KNOW how the beginning WAS?

My answer is to use the Scriptures themselves; “All Scripture is given by inspiration of God, and is profitable for doctrine, for reproof, for correction, for instruction in righteousness, that the man of God may be complete, thoroughly equipped for every good work.” – 2 Timothy 3:16-17.

1 Corinthians 2:9-14, “But as it is written: Eye has not seen, nor ear heard, Nor have entered into the heart of man The things which God has prepared for those who love Him. But God has revealed them to us through His Spirit. For the Spirit searches all things, yes, the deep things of God. For what man knows the things of a man except the spirit of the man which is in him? Even so no one knows the things of God except the Spirit of God. Now we have received, not the spirit of the world, but the Spirit who is from God, that we might know the things that have been freely given to us by God. These things we also speak, not in words which man’s wisdom teaches but which the Holy Spirit teaches, comparing spiritual things with spiritual. But the natural man does not receive the things of the Spirit of God, for they are foolishness to him; nor can he know them, because they are spiritually discerned.”

Christians believe without doubt, that the Holy Spirit moved upon the mind of man with inspiration to write down what is upon the very Heart of God Almighty! This same thread runs through ALL the Scriptures and even though evidence of individual writers is evidenced, the same unity of Spirit is also clear and with NO contradictions!

But, and I AM going to qualify that statement here by reiterating what the Holy Word says in the above verses; “But the natural man does not receive the things of the Spirit of God, for they are foolishness to him; nor can he know them, because they are spiritually discerned.”

My wife and I love to watch some of the documentary channels that are available on the television, such as the Discovery channels, National Geographic, History channels etc. But as with the news broadcasts, I have a definite love/hate relationship with them. So many of them have such a liberal slant when it comes to things of a Biblical and spiritual nature and the “authorities” they use to back up their claims are invariably Theologians, Bible Scholars and Professional Professors etc., from very liberal (for the most part) Universities and Institutions.

Now don’t get me wrong, I am NOT against advanced education or higher learning at all; only to the extent that your “intellect” interferes with your ability to be spiritually discerning. The sad thing about scholars and the Bible is that as I discussed with some brothers and sisters in Christ earlier, education has a tendency of wanting to make the Scriptures far more difficult than what they truly are. In the circumstances demanding faith, blind faith, it is difficult for a highly intellectual person to come to grips with something that is beyond their comprehension or that they can’t quantify with one of their senses. Yet the very Word of God demands to NOT use the natural senses, but our spiritual sense of discernment or the ability to know the truth on a spiritual level.

In the beginning; in OUR beginning, was the Word, the Word was with God AND the Word was God. The Word you are reading when you read the sixty-six books of our Bible (*My Catholic brothers and sisters, and 1611 KJV devotees , please read footnote), is the very same Word that was with God and IS God! That is why it IS living and powerful and able to accomplish all that Hebrews 4:12 tells us it is capable of doing.

Are you still wondering how this can be? Paul explained it so eloquently in 2 Corinthians 3:3-6, “…clearly you are an epistle of Christ, ministered by us, written not with ink but by the Spirit of the living God, not on tablets of stone but on tablets of flesh, that is, of the heart. And we have such trust through Christ toward God. Not that we are sufficient of ourselves to think of anything as being from ourselves, but our sufficiency is from God, who also made us sufficient as ministers of the new covenant, not of the letter but of the Spirit; for the letter kills, but the Spirit gives life.”

My personal favorite quote in this and especially when taking the Bible to heart is the last part in verse six, “not of the letter but of the Spirit; for the letter kills, but the Spirit gives life.” You see, each of us who follows after Christ (those determined and willing despite setbacks) are just like the Bible itself, or at least individual books of the Word. Paul said it when he stated we are epistles, ourselves; written by the Holy Spirit as evidenced in our heart behavior!

You see, when Moses began writing with pen and ink, it was the same Word that was with God and is God from the very beginning of our creation that instilled in him the words to put down. Moses was privileged with a higher education because of his status in Egypt. But it wasn’t his education that allowed him to write what the Holy Spirit laid upon his heart, it was his relationship with the Creator as a Father that allowed the Spirit of the Father to dictate the Word to the heart of the created son! It was Father’s Spirit to son’s spirit.

Throughout the Holy Scriptures you see this spiritual thread; the Word of God is a spiritual discourse, it is a spiritual conversation, it is and always was meant to be read, not with the intellectual mind of man, but the spiritual discernment of man’s spirit and heart with his Creator, his Heavenly Father. 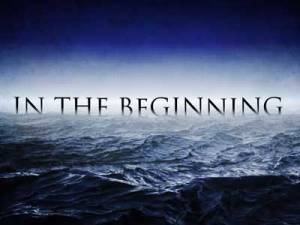 IN THE BEGINNING. Simple, revealing, yet deep; much deeper than a lot want to admit. It is our beginning, and the beginning of life created in the image of its Maker. The beginning of man’s relationship with the creation around him, in the natural AND in the spiritual. But, it is just the beginning and that is not to undermine its importance, by saying, just.

Our Heavenly Father wants us to know that we had a start, and there is a reason for that. The Bible is full of the reason why He Created mankind, but it is not always spelled out in just words. It is demonstrated in the Spirit and the examples of the words themselves.

Who the Word is and His Character (personality and attributes) and what it tells us about Him is next, in THE LIVING WORD segment.

*I have not included the Apocrypha books found in the Roman Catholic Bible and the 1611 King James Version not because they aren’t important writings, but to maintain unity, rather than what has in the past caused division.

5 Responses to The Living Word – In The Beginning