Jesus was preparing His disciples for the time when He would no longer be with them and they would be ministering to others in His place. It was a critical period in their lives and there are important lessons for us to learn from the Lord’s teaching.

In this chapter, Luke recorded lessons that Jesus gave His disciples about some of the more important essentials of the Christian life: forgiveness, faithfulness, thankfulness, and preparedness.

Now it happened as He went to Jerusalem that He passed through the midst of Samaria and Galilee. Then as He entered a certain village, there met Him ten men who were lepers, who stood afar off. And they lifted up their voices and said, “Jesus, Master, have mercy on us!”

So when He saw them, He said to them, “Go, show yourselves to the priests.” And so it was that as they went, they were cleansed.

And one of them, when he saw that he was healed, returned, and with a loud voice glorified God, and fell down on his face at His feet, giving Him thanks. And he was a Samaritan.

So Jesus answered and said, “Were there not ten cleansed? But where are the nine? Were there not any found who returned to give glory to God except this foreigner?” And He said to him, “Arise, go your way. Your faith has made you well.”

Between verses 10 and 11, the events of John 11 in relation to His friend Lazarus occurred as the Lord Jesus made His way to Jerusalem. At the border of Samaria and Judea, Jesus healed ten lepers at one time, and the fact that the miracle involved a Samaritan made it even more significant (see Luke 10:30–37). Jesus used this event to teach a lesson about gratitude to God.

The account begins with ten unclean men, all of whom were lepers. The Jews and Samaritans would not normally live together, but misery loves company and all ten were outcasts. What difference does birth make if you are experiencing a living death? But these men had hope, for Jesus was there, and they cried out to Him for mercy. The word translated “master” is the same one Peter used (Luke 5:5) and in the original Greek means “chief commander.” They knew that Jesus was totally in command of even disease and death, and they trusted Him to help them. 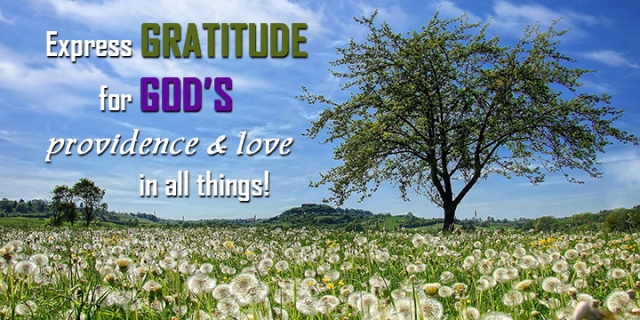 The account continues by referring to nine ungrateful men. Jesus commanded the men to go show themselves to the priest, which in itself was an act of faith, for they had not yet been cured. When they turned to obey, they were completely healed, for their obedience was evidence of their faith (see 2 Kings 5:1–14).

You would have expected all ten men to run to Jesus and thank Him for a new start in life, but only one did so . . . and he was not even a Jew. How grateful the men should have been for the providence of God that brought Jesus into their area, for the love that caused Him to pay attention to them and their need, and for the grace and power of God that brought about their healing. You would naturally think they would have formed an impromptu men’s chorus and sung a continuous chorus of hallelujah’s together!

But before judging them too harshly, we have to consider what our own “Gratitude Quotient” is? How often do we take our blessings for granted and fail to thank the Lord? “Oh, that men would give thanks to the LORD for His goodness, And for His wonderful works to the children of men!” – Psalm 107:8, 15, 21, 31. Too often we are content to enjoy the gift but we forget the Giver. We are often quick to pray but slow to praise.

Luke’s account closes with only one unusual man. The Samaritan must have shouted “Glory to God!” because he fell at Jesus’ feet to praise Him and give Him thanks. It would have been logical for him to have followed the other men and gone to the temple, but he first came to the Lord Jesus with his sacrifice of praise (Psalm 107:22; Hebrews 13:15). This pleased the Lord more than all the sacrifices the other men offered, even though they were obeying the Law (Psalm 51:15–17). Instead of going to the priest, the Samaritan became a priest, and he built his altar at the feet of Jesus (read Psalm 116:12–19).

By coming to Jesus, the man received something greater than physical healing: he was also saved from his sins. Jesus said to him, “Your faith has saved you” (literal translation), the same words He spoke to the repentant woman who anointed His feet (Luke 7:50). The Samaritan’s nine friends were declared clean by the priest, but he was declared saved by the Son of God! While it is wonderful to experience the miracle of physical healing, it is even more wonderful to experience the miracle of eternal salvation.

Too many today are this way, looking for the sensational miracle in the natural that is still only temporary, only to forget that the eternal miracle of healing (salvation) is forever!

Every child of God should cultivate the grace of gratitude. It not only opens the heart to further blessings but glorifies and pleases the Father. An unthankful heart is fertile soil for all kinds of sins (Romans 1:21-32). However the faith necessary for a grateful heart is what pleases the Lord (Hebrews 11:6).