What a Treasure You Are!

We also know that the Son did not come to help angels; he came to help the descendants of Abraham. Therefore, it was necessary for him to be made in every respect like us, his brothers and sisters, so that he could be our merciful and faithful High Priest before God. Then he could offer a sacrifice that would take away the sins of the people. Since he himself has gone through suffering and testing, he is able to help us when we are being tested. (NLT)

Some of you know that there is this tree outside my house in the neighbor’s backyard that overlooks my office and I call it my “inspiration tree.” Well, the other day, I was sitting there after reading my Bible and my mind was wandering a bit and I was also talking with the Lord, and I happened to notice some dead branches in the tree.

It IS a beautiful large tree and in fact I took a picture of it a while back and had to take three shots to make what is called a vertorama of the tree. Basically it’s a vertical panorama, an image consisting of multiple images. Anyway, the point is, it is large and when it’s full of leaves it is absolutely beautiful (plus some squirrels have built there nest in it).

But I’ve recently noticed a few dead branches and I was thinking to myself what a shame that is on something so magnificent and beautiful. But that led me to the Scriptures in Romans that the Apostle Paul wrote, “Because the creation itself also will be delivered from the bondage of corruption into the glorious liberty of the children of God.” – Romans 8:21 NKJV.

Even creation, created for man’s pleasure in the beginning was subjected to the curse of Adam’s sin, Paul wrote, “not willingly” and yet it awaits our own redemption because once the curse is broken in us, it is broken in ALL of creation according to the Word! What a marvelous thought. 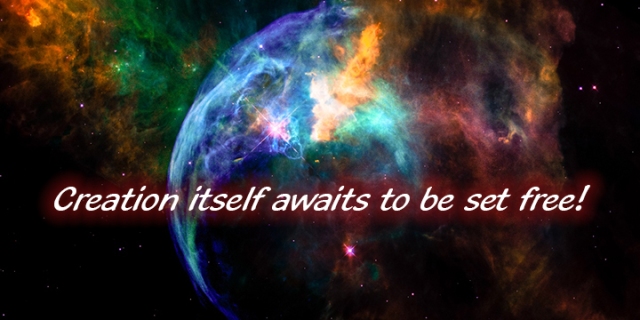 Yet, you know, the Holy Spirit didn’t let me off so easy right then as my thoughts continued to pursue this idea. I started thinking about the Lord knowing all this even before He created the universe and all that’s in it and that includes mankind. He knew Adam was going to sin, but God’s plan all along was to make a creation that had the free will to love Him for who He is and not just for what He could give them. The only way to do that, is for man to be free to make His own choices, but to have a way to be redeemed from the darkness that is inherent in his heart. That’s why before our very beginning, before God even created TIME for which we would have to live for a spell, He looked to the Son, incarnate at that moment, yet ever with Him and they came up with the plan to create mankind with the hopes and prospects of redemption if man chooses to accept it, because God loves His creation without limits, something that is totally beyond our ability to fully comprehend.

Now think of this; before God even spoke the words, He was seeing the end result and everything leading to that result. He knew who would accept Him and who would not, no matter what was offered. He was aware of the taint of sin that man’s choices would place upon the whole of creation. He knew that it would usher in death and suffering for a time and not just within mankind, but within everything, everywhere that has life.

If you haven’t thought about it, that is the reason there will HAVE to be a new Heaven and a new Earth. Man’s sinfulness and the darkness and taint associated with it, is just that far reaching! You can understand why Jesus used the parables of the yeast in a few of His stories, because sin is just like that; it only takes a little to saturate a lot of dough. It only takes a little sin to contaminate the whole universe that man lives in and is a part of. That is a horrific thought if you give time to think about it.

Yet God knew this all. He could have said it’s not worth it. He could have chosen to do something entirely different. I mean after all, He already had angels and they were definitely superior to man according to the Bible.

A few verses before the ones I gave above, you can see what the writer of Hebrews wrote about man’s place in rank with the angels. (See Hebrews 2:5-8). Yet despite all that God has foreseen and most likely much more than we could ever imagine, He deemed that His creation and mankind specifically was worth it.

Now follow me just a bit more; from the very beginning with Adam and all the creatures and plant-life that has ever lived, there has been death, pain and suffering from the time of Adam’s first sin. For all the thousands of years that man has walked this earth, there has been death AND destruction. Keep in mind the flood and the destruction it wrought on the Earth! Yet despite all that, God as thought that mankind is worth it.

He sent His Son to earth, clothed as ALL man, so that He would experience every little thing that mankind has ever experienced or will ever experience even though He was also ALL God! The Spirit of God dwelt in His flesh and that why He told us He came to SHOW us the Father, who is Spirit. Yet He chose the suffering, the pains, the weariness that the flesh endures.

And here’s another thought; unless you have been spiritually active in the ministry gift God has given you AND everyone HAS a gift, some just don’t realize it due to lack of teaching, but if you have walked spiritually in that, you will notice that after your task or service is done for a time, you flesh literally rebels at the spirit working within that vessel. You can ask any preacher who has preached with an anointing on Sundays or other times, and ask them what the next day or so is like! Can you imagine if we, with our limited anointing feel that weariness in the flesh, what the Savior must have felt like as MAN after some of the miracles? He came to experience man’s plight, so I will never be convinced He used His deity to disregard that experience!

So here’s the thought; if God is willing to do all that He has done for His creation and especially for mankind, and He has allowed the outright rejection FROM His willful creation and has put up with the sin that is absolutely abhorrent to Him and the death and despair that comes with it to ALL of His creation and not just mankind, and if He is willing to send His One and only Son to take on the form of man, so that He can be mankind’s Mediator and Advocate, and He is willing for His Son to face such severe suffering and eve death even though knowing His Son would overcome death and the grave, just so a few throughout history would welcome such a great gift, here’s my question:

How valuable in the Father’s eyes and heart, does that make each and everyone who accepts Jesus AS their Redeemer?

The Father KNOWS that this creation will have to burn eventually to erase the stain of sin that taints it and yet He is willing to start creating something new for those who have, do and will accept the Redemption found in Christ Jesus alone! What kind of value can you put upon each and every life that surrenders to Christ Jesus? It is no wonder what the Bible says, Jesus is preparing for us in the Father’s coming Kingdom with paving materials made of gold and walls made of jewels. Think of it; He’s using what man thinks is so precious today and He’s using it for construction material because He feels that is just how valuable, we as His children are! 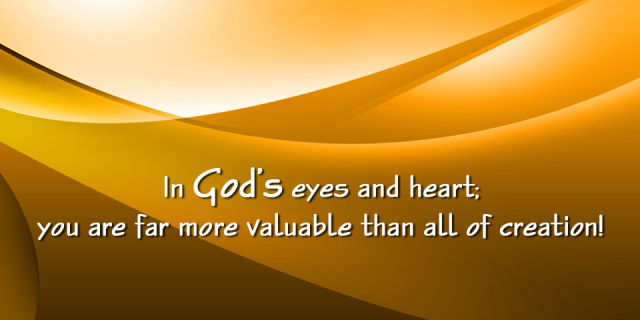 My hope and my prayer that this thought will inspire you and motivate you and encourage you to continue on in your walk, in your journey no matter what may seem to come your way. I hope this will cause you to pray more for those that are lost and not just your loved ones. God knows and has told us, not everyone will be redeemed. Some for what ever reason will just outright reject what He has instore for those who choose to love Him. But oh the joys, oh the glory that He has promised to have prepared for those He is willing to call His children.

His children, are more valuable to Him than all that man is aware that God Almighty has created! When you see the advances of Science, Knowledge in other words, that the Bible has prophesied, and when you see mankind trying to see back to the beginning of creation like they are attempting to do and when you consider the light-years, the miles, the billions of stars, and galaxies, in this known universe; remember, compared to just one of you, one of us, who call God, Father from a sincere heart, the universe is nothing compared to your value to Him!!

Now I saw a new heaven and a new earth, for the first heaven and the first earth had passed away. Also there was no more sea. Then I, John, saw the holy city, New Jerusalem, coming down out of heaven from God, prepared as a bride adorned for her husband. And I heard a loud voice from heaven saying, “Behold, the tabernacle of God is with men, and He will dwell with them, and they shall be His people. God Himself will be with them and be their God. And God will wipe away every tear from their eyes; there shall be no more death, nor sorrow, nor crying. There shall be no more pain, for the former things have passed away.” (NKJV)