Philemon 1:14-16, But without your consent I wanted to do nothing, that your good deed might not be by compulsion, as it were, but voluntary. For perhaps he departed for a while for this purpose, that you might receive him forever, no longer as a slave but more than a slave—a beloved brother, especially to me but how much more to you, both in the flesh and in the Lord.

I am constantly amazed at the Apostle’s wisdom when dealing with any of life’s circumstances. Now don’t get me wrong, it is the result of Paul being a new creation in Christ Jesus just like he wrote to the Corinthians, but it is an ultimate manifestation of the work of the Holy Spirit in another’s life. Paul was already an educated man, but in the ways of the Law. When he became a Christian, the Holy Spirit gave him the wisdom and knowledge to become an expert in the grace of God! What a transformation indeed.

In the above verses, the Apostle is expanding upon his previous thoughts of Onesimus as Philemon’s assistant to Paul rather than just a runaway slave and now Paul applies some “icing” as it were on the cake! Yes, he would love to keep Onesimus because of the help that he has been to Paul while in chains, but he relays to Philemon that without Philemon’s consent, he would not stoop to do such a thing, either by assumption or presumption even though they were more than friends, they were spiritual brothers.

As it was, Paul was letting his friend know that he was not going to take undo advantage of their relationship for Onesimus was still the “property” of Philemon and as such (and according to the law of the land) he was not going to take advantage of the situation. When Paul states that he would love Philemon’s decision and/or permission to be voluntary, the original language uses the term spontaneous. In other words without any coercion or force applied. Though it may seem that Paul’s use of words and his play upon the emotions of Philemon, he is not even emotionally trying to coerce his friend. It is truly reminiscent of what Paul wrote to the Corinthians:

So let each one give as he purposes in his heart, not grudgingly or of necessity; for God loves a cheerful giver. – 2 Corinthians 9:7.

Being given the chance to do something voluntarily, even if a suggestion is made, is what as Christians we need to employ in our walk with the Lord in ALL areas of our lives. Giving because you feel forced in whatever the circumstance gains you absolutely no eternal reward. It must come from your willingness of heart and in essence, this is what Paul is telling his friend. Paul in this case is in essence giving his friend the freedom to do what is right out of love for the Lord and to do it in his own choosing.

As many of you who follow me to an extent know that one of my favorite Scriptures is by the Apostle Paul in Romans:

And we know that all things work together for good to those who love God, to those who are the called according to His purpose. – Romans 8:28.

This Scripture has been one of never-ending comfort and assurance to me. Especially as I have gotten older and have experienced some serious health issues, I have been able to see the hand of God work in all those circumstances for His glory. When You truly belong to the Lord and have surrendered to His perfect will, there is nothing in Your life, and I mean nothing, that God can’t use for the sake of His glory if You let Him and acknowledge Him.

In this next verse Paul is definitely demonstrating his spiritual maturity in his ability to look beyond what could be a very tragic circumstance to see God working in the situation. I’m not exaggerating when I say the word tragic either, because under Roman law, a slave owner could have his slave put to death for doing the very same thing that Onesimus did. I mean, Philemon, though a Christian, lost an important asset and thus he had to have suffered some financial loss as well as the possibility of being a bit upset if not outright bitter. 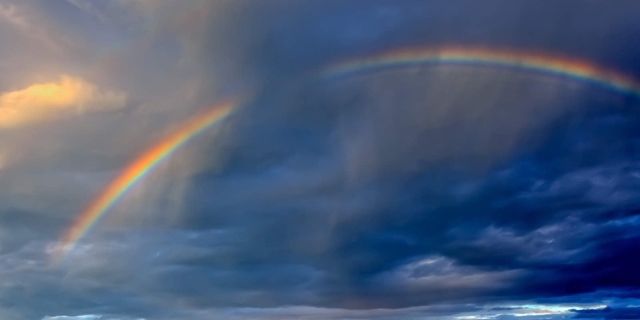 However, and I love the turn of phrase one commentator says, when he states that “Paul traces the rainbow through the dark clouds.”[1]

Paul is obviously showing his friend the possible silver lining behind the dark cloud of the situation.

According to the Apostle, his new protégé was lost to Philemon’s family for a time, but possibly for God’s perfect purpose that they can have him back forever. In one sense, this very much parallels anyone who faces loss of a loved one or friend and should give them comfort that one day, in the Lord, they WILL be reunited! Now I don’t necessarily believe that Paul is stating that Onesimus will be back with Philemon forever in the natural, but in the spiritual they WILL be brothers in Christ forever. As in everyday life, separations can be painful and hurt, but they are in the eternal scheme of things only temporary once the eternal reunion takes place in the lives of Christians!

Something else to notice when you contemplate this verse; the Apostle is speaking rather softly concerning Onesimus’ escape as a slave. Again, this demonstrates Paul’s wisdom in light of the Holy Spirit’s inspiration. I believe with all my heart, that the Lord, who has always been aware of the circumstance found it to be a perfect example of demonstrating His love to a world that has in essence escaped from His loving Kingdom. Like Onesimus who broke the law and sinned, so too did humanity way back in the Garden that was prepared for us. Paul seemed to sense or see God’s purpose in this whole situation and was relaying that very thing to his friend.

Notice too that Paul didn’t approach Philemon with, “Now see here, God has shown me His plan in all this and so you have to accept it as such also!” No, instead, he very gently and wisely stated PERHAPS this is the reason it could have happened. This allows all parties to see the possibilities that are at God’s disposal, again, no matter the circumstance.

Then Paul hinted at the possible purpose; yes you lost a slave and one as we stated before was at the time of his servitude rather useless, but now he is no longer JUST a slave but in actuality is much more than a slave, coming back to his owner. Now Philemon is also getting back a brother in Christ, one now belonging to his spiritual family! Paul was reintroducing Onesimus the slave now as Onesimus, your brother in the Lord! To any disciple of Christ who has in the past exemplified the love of Christ to others as Philemon most certainly demonstrated would immediately see the glorious turn of events in that seemingly happenstance situation.

His slave, whom he could have surmised that he had lost forever, found in the company of his own mentor, only to be converted to Christianity as well and then be reintroduced with all the Christian values not just as a slave but now an eternal brother and heir with him! There is just no such thing as  coincidence when people walk with the Lord. God is ALWAYS in control! Those who have walked with the Lord for any amount of time we always see God’s hands as divine providence even in the smallest areas of our lives!

So what Paul is telling Philemon outright is that because of God’s love and because His election is sure, Philemon isn’t just getting a better slave (if he so chooses to keep him that way), he’s getting a beloved brother in the Lord. Onesimus, being a new convert will most certainly benefit from the Christian mentoring that could continue under Philemon as well. After all, they both have Paul and the leading of the Holy Spirit in their situation to thank for that.

Paul was letting Philemon know that to Paul himself, Onesimus had already become a beloved brother and so his confidence was that it would be that much more for Philemon, accepting him in the Lord. Paul adds a phrase at the end of that verse, “both in the flesh and in the Lord.” This very well could be the Apostle giving further commendation to Onesimus because of his service to Paul in the flesh as well as in the Spirit of the Lord’s love as Onesimus already demonstrated and thus Philemon could expect the same thing, “in the flesh and in the Lord.”

*Side Note: Now we don’t have any real knowledge as to whether Philemon did emancipate Onesimus, but there is evidence that later on in the early church the name Onesimus does appear as a bishop in three different cities. Whether it is anyone of these three is not specifically known though the time period fits in with the age of Onesimus. The cities in question were Constantinople, Boroea and Ephesus. The fact that Ephesus is one of them does lend more credence to the possibility but it would still only be speculation.

It is always so amazing to see how the hand of God plays out in human affairs and most especially in the circumstances of those who walk with Him. Like that old saying goes, “hindsight is always better than foresight,” but when you are able to see a Biblical narrative of that truth, you can’t but be amazed at the handiwork of our Lord in the lives of those He truly loves!