How Sure Is Your Believing?

*Pastor’s Note: This is one of the articles I wrote and posted for my very first website and it was soon after the attack of 9-11-2001. I thought it might interest my readers to read some of my first posted writings. I HAVE updated some of the Scripture references, but all in all, it is pretty much as I posted them on my very first website. The pictures were added for this posting, though.

This was the lesson that I was going to submit before the attack on the World Trade Centers on September 11, 2001. In the light of that hindsight, it is amazing to me what I see the Holy Spirit wanting to say to those that claim to be Christians. Yes, I said, who claim to be Christians. Remember that the content of this and the study that preceded the last one, I titled “Exploring true Christianity.” Jesus forewarned us in the Gospel of Matthew that many in the last days would come not only claiming to be the Christ or Messiah, but that many would also come in His name, using His name for their own motives and that we were to be on guard against those that come falsely. We have seen in previous studies that the Apostle John has told us to “test the spirits” to see whether they come from God. 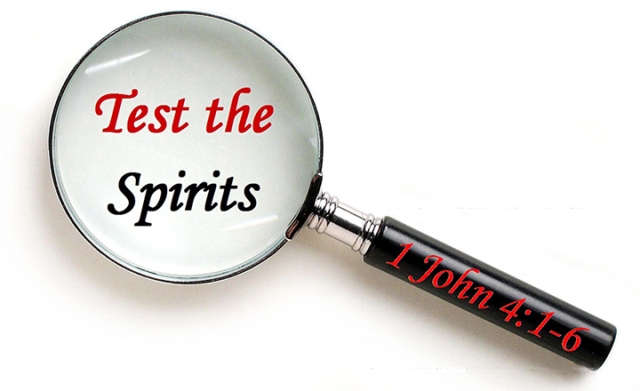 This has been something that we have been not only lax to do, but sometimes rather hesitant because of the teaching that we have received and the environment of “political correctness” that has permeated everything including the churches. We have a tendency to believe that if I make a determination about the truth of something or someone, I am judging and therefore I am being non-Christ like. I believe we have been duped by the enemy into believing half-truths because of our lack of studying on behalf of the gospels.

Now, forgive me if I am sounding a bit too critical. That is not my intention, but rather, it is my attention to cause you to think about finding the balance that is entrusted to us throughout the WHOLE scriptures. For every responsibility that we are given in the Word of God, we are given the balance so as to not go to an extreme. We have such an innate tendency to either become condemning, notice I didn’t use the word judgmental, or we become apathetic and complacent. Either extreme is a compromise to the Holy Word of God.

The reason this seems so apropos, is that in the light of the recent attacks on America, they were done because, by the terrorists who pervert the truth of Islam, we are a Christian nation. In fact, any nation who sides with us is considered to be on the side of Christianity as opposed to what they purport is Islam.

My challenge to you is this: it is easy to SAY you are a Christian, but in actuality are you what you say? That brings us to the key scripture for this lesson. James was actually talking to some Christian leaders of his day when he made the statements that are found in the second chapter of his letter. When you read those few verses, he certainly comes on strong, and by today’s standards he would be considered critical and judgmental. Yet, the Word of God stands strong and true to this day.

You know the old saying, my father-in-law used to quote it all the time, “Actions speak louder than words.” At the time, dad was not so well versed in scripture, and it was a common quote. But isn’t it amazing that we have adopted that quote down through the decades at least, and we take stock in and believe what it means. That is what James was trying to get across to religious leaders of his day, those that claimed they were Christians. 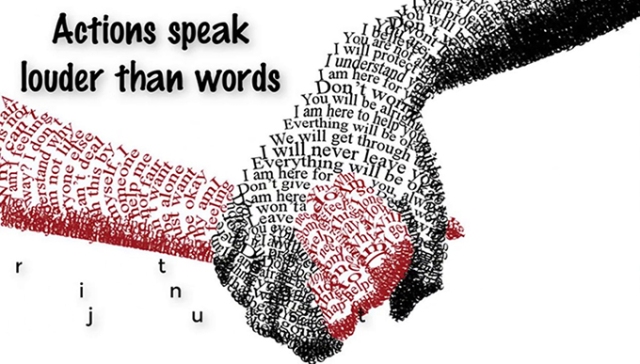 Today, there are many who do believe in Jesus. In fact in the true Islamic faith, Jesus is recognized for being a great teacher, a messenger of God (just not the last one), but certainly not as the Son of God and definitely not God incarnate. Jesus was an historical figure. Anyone who was to say that the Jesus who was born to Mary, the wife of Joseph was not a real person would probably be looked upon as someone who crawled out from a cave.

But that belief alone is not enough to assure those that believe a place in the Father’s Kingdom. James boldly states that even the demons believe. We certainly do not believe that they are assured salvation, for the scriptures are very clear about their final outcome. Their works belie the fact of a belief in His redemptive authority and power.

When we believe with total certainty the actuality of something, our actions demonstrate that belief. For example, when you walk into a darkened room in your house, you instinctively reach for the light switch with full expectation that when you flip that switch on, there will be light. You do not analyze the situation, because through what you have been taught, in conjunction with experience, you KNOW that when you flip that switch, light will shine forth. You know it, you don’t give it a seconds doubt or thought. In fact, it is so profound a belief that when a light has blown or a circuit is broken, it actually throws you for a second or two. You know what I am talking about. You never enter that room and before you throw the switch, think to yourself, I hope the light isn’t burnt out, I hope the circuit breaker isn’t blown, what happens if this doesn’t work, etc. You have come to know that when that switch is thrown, light appears.

That in it’s simplest form is what James is talking about. If you let doubts pervade your thoughts your actions would be frozen and you would never even consider throwing that switch. You couldn’t will the light to come on as if by some magic formula. Just knowing how the circuits work that allow the electricity to the bulb wouldn’t be enough to activate the light. Speaking to the room or switch or light source wouldn’t accomplish anything; you had to do something to make it all come about. So it is with our faith, our belief. 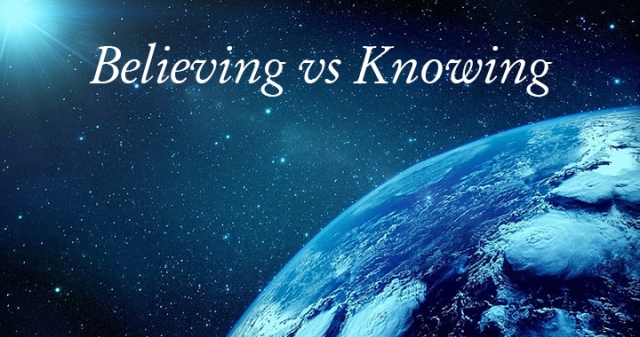 When we have come to the point, through teaching in conjunction with experience, that it is no longer just a matter of believing something, but it has matured to the point of KNOWING something, our faith is acted upon. You no longer analyze your circumstances; you don’t stop and think, “I believe this way so I must do this thing,” rather you just do and your life demonstrates by action what it is you do believe. Anyone who spends anytime around you will know what you believe. Your actions do speak louder than your words!

In Christian circles today, we have relegated speaking to a high art form. Hey listen, I’m a preacher, I know, at least to a degree, what it takes to captivate a crowd. But, in the process of relying so much on speech, we have forgotten the importance and overall necessity of actions.

James says it well in these verses, “If a brother or sister is without clothing and in need of daily food, and one of you says to them, “Go in peace, be warmed and be filled,”’ and yet you do not give them what is necessary for their body, what use is that? Even so faith, if it has no works, is dead, being by itself.” – James 2:15-17.

To do like James describes is almost like reciting a magic formula or a spell. The words are there, but there is no substance. And, this is one instance where the saying, “it’s the thought that counts,” has absolutely no value. Faith or belief, like so many other godly attributes demands action for it to be what it is claimed to be, and to the world at large, actions do speak louder than words.

Let’s take this one step further. What I am about to say next may cause quite a commotion. Are you relying on a few words or phrases that you may have once said, to secure your place in heaven? Are you believing that those “magical” words alone opened the doors to an eternity of bliss? Or, was the commitment you made at the time you knelt before the Savior enough to allow Him to change you into a totally different person? If someone who never knew you were to spend a day with you, would they see a unique individual, or just one who talks about high and mighty things? Would that person know what you believe by spending time with you? Was it just the confession of the mouth or did belief precede that within your heart and mind?

James, Peter, Paul, John, and all the other disciples who walked and talked with Jesus didn’t just believe in what He said. Yes, it started out as belief, but it soon became knowledge, and that is what has made their testimonies so dynamic, so alive with power and authority. As we mature, and granted we all mature at different rates, we must go beyond just believing, we must go beyond just the sayings, we must come into the knowing or the knowledge. It is knowledge that makes us act the way we act. The more we know, truly know, the more we act. 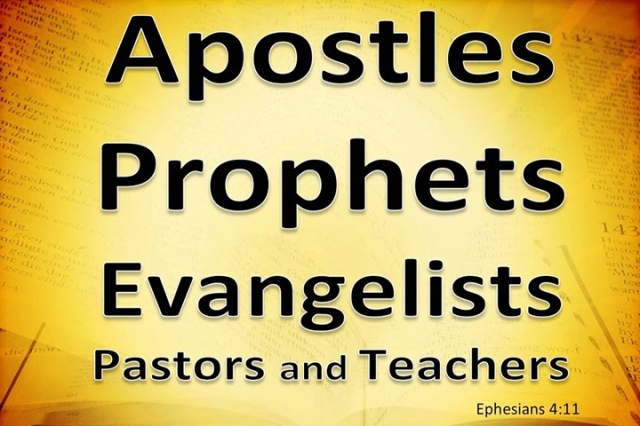 That is why we preach and teach and exhort and prophecy to all and any who would listen. We must equip the saints so that they can do the work. So that they can act in their lives. We serve one another. We serve those that are less fortunate. We do so out of love, which requires us to act. Our service to one another actually builds, strengthens, fortifies the body of Christ. The reason? So that we all, meaning not one left behind, we all attain a oneness of faith in the Son of God, Jesus Christ and we come to the knowledge of Him. That knowledge is not a head knowledge of some historical person, but rather the intimate heart knowledge that goes with a personal, in depth relationship. That takes action. I know that is what the Body of Christ, the Bride is to be. A living, powerful, dynamic force that is preparing for the day of the coming Bridegroom. Just talk? Not from where I stand. Hopefully, not in your life either.

Let’s not just talk about it anymore, talk is fine to encourage one another, but let’s get to work! Come quickly Lord, Jesus your Bride is waiting!