I’ve been doing a theme today on TRUTH on the social media platform Facebook and I’ve been looking over several websites and articles that deal with science and the “truth!” Now understand something, I love the different sciences and I love when they are able to come up with what I call “hard science” because it is usually confirmed with Biblical writings. What I totally dislike is those that put out “theoretical science” as “hard science.” Theories are just what they sound like, beliefs that haven’t been proven yet.

Too many in the sciences today abuse their quest for more knowledge as if everything they come up with is the unassailable truth and many who are NOT scientists or science savvy tend to take what they put out as the absolute truth. Again, mind you, I am not against science that has a proven track record and even theoretical science is important considering the goal is to get TOO the truth. As long as it is acknowledged that it is just theory I can even be fine with that, but when they try to put forth their theories as fact, then it becomes a lie and it serves no purpose and no one who is searching for the truth.

We need to remember as Christians, true followers of the examples of Christ Jesus, that He came to show us the Father, our Heavenly Father, God Almighty. One of the attributes of God Almighty is that He is Omniscient. Now I have taught on this a lot in the past, but remember that simply means All-knowing. Yet, when you break it down, it means all-truth, all-science. Science is the pursuit of truth and knowledge. God IS and He created the thirst for sciences in us when He created us in His likeness. That thirst for truth and knowledge comes from His “breathing” His Spirit and making us who we are.

So, how to know real truth from supposed truth or just beliefs becomes an important question for a Christian in today’s ever-changing world where as the Prophet Daniel prophesied, “knowledge would be on the increase!” (Daniel 12:4).

A former professor of Old Testament at the University of Greisfwald, the late Dr. Alfred Jepsen (1902 -1979) stated this: “Truth is that which is constant and unchangeable . . . something on which someone can rely, which will prove to be true in the future.”[1]

Now here are a few Scriptures that tell us outright about the unchangeableness and the truth intrinsically inherent in God’s Character:

We can add “unchangeableness and reliability” to “faithfulness, constancy, and dependability,” as words that convey the core meaning of biblical truth. 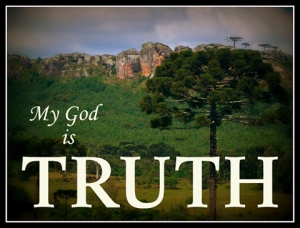 We can see very specifically that the Bible identifies truth not simply as the absence of lies but as a quality inherent, innate and ingrained within the very nature of God, as was fully manifested in His Son Jesus Christ. Jesus not only spoke true word, but He WAS, and IS, the ultimate expression of truth.

The Bible tells us that Jesus has come to proclaim and confirm the truth to those who are seeking truth.

Many people today understand “truth” simply as “something declared to be a fact by science.” The problem with this is that scientists can be and many times ARE wrong. Don’t get misunderstand what I’m saying; that is part of actually coming to the knowledge of the truth. There are many instances though of scientific “truths” or beliefs, theories published as “fact” in papers, journals, books, classroom textbooks, and the media, as I stated at the beginning of this article, that later prove to be partially or completely erroneous and have to be reassessed.

Now there’s a website I like to visit from time to time called LiveScience[2] and their website reported that “an increasing number of scientific studies are just plain wrong and are ultimately retracted . . . most involving no blatant malfeasance, but others are due to cooked data.” On the other hand, honest scientists who publish tentative, non-dogmatic findings, can sometimes have their conclusions inflated to the level of proven “facts” in the media, accompanied by sensationalist headlines.[3]

It’s a great irony that the discipline of science, which SO many people view as the ultimate standard-bearer of truth is in fact in a perpetual quest for yet more understanding, and in a constant state of “not yet knowing everything” and “all we get is more questions.”

This is why we need to use the gifts the Holy Spirit gives to us and especially a gift that is accessible to ALL born-again Christians, the gift of discernment. It allows us to know, within our spirit, what is true and what is false. Second, we need to take the Bible’s own advice and “Be diligent to present yourself approved to God, a worker who does not need to be ashamed, rightly dividing the word of truth. But shun profane and idle babblings, for they will increase to more ungodliness.” – 2 Timothy 2:15-16.

Now understand this; profane and idle babblings literally means worldly and empty chatter. There is nothing wrong with intellectual and even philosophical discussions and modern science is not something to be afraid of, as long as you use discernment and spiritual wisdom, never forgetting that God’s wisdom is far above and removed from worldly wisdom. One other thing also is that many Christians as I have taught before, have a tendency of putting God Almighty in a box. We have a tendency to make God fit our abilities to comprehend, which for the most part is so far beyond comprehension with the limitations of our carnal minds. Yet, when we allow the spirit within us to dare to dream and imagine more than we ever have, especially concerning the spiritual, there should be no fear in embracing SOME science. Remember, our GOD is the author of what mankind loves to take so much credit for.

Our God is eternal. He has NEVER been bound to time and the instances in the Bible where time is referenced in relation to God, it is for OUR benefit and limited comprehension. Every instance where time is associated with God is so that we can understand beyond a shadow of a doubt that time is nothing to an Eternal and Infinite God.

So, truth, absolute truth is found in our unchangeable God Almighty, our Heavenly Father and in His Son Jesus Christ! Since the Bible reveals to us the very Character, Nature and Attributes of our Heavenly Father and that Word was in the beginning WITH God, we can also rely in the absolute truth of what is written there. Remember, the Holy Spirit OF God inspired that written, Living Word, and His inspiration has not stopped when it was completed, so you can rest assured that He will illuminate and reveal to your heart the TRUTH written within its pages!