The Apostle is continuing on with his discourse into the spirit of antichrists that were even then prevalent in the world during his time. John starts out with one of my favorite and most comforting of declarations, “BECAUSE, He who is in you is greater than he who is in the world!”

The Beloved Apostle just finished a discourse on the spirit of antichrist and the deception and false teaching that they were and would be known for in the future, but, as is his style, John reaches out to the readers in the familial style by stating adamantly, “YOU ARE OF GOD, little children!” Notice that he is NOT being belittling, but rather as he so often does, he is being endearing, letting them/us know that as family, they/we are ALL going through these times together, AS family, as children of an Almighty God. He is also reminding the child of God that they have already in times past overcome that spirit of which he is talking! So there should be assurance and comfort in that very fact that they have already fought the enemy.

John is assuring them of a spiritual principle in those few words; you are of God, you are born of God, abide in God, and thus you are anointed of God and led by God; you are God’s children, heirs to Him, created in His likeness and image, reborn spiritually to inherit the power and anointing of His spirit within you! Now think of what I just wrote; how awesome and assuring is that?! His spirit within us is no longer dead and dormant, sleeping and numb to what is around us, but in Christ, our spirit has been reborn and quickened by the same Holy Spirit that quickened Jesus Christ! It is alive and because it is “breathed of God,” it is powerful and aware of what is around us!

We, who HAVE been spiritually reborn are God’s chosen, children yes, but also heirs with Christ Jesus and because we are God’s chosen, we are protected, secure from the lies and deceptions of the enemy spirits. One of Christ’s greatest promises so thoroughly upset the Jewish leaders that they wanted to stone Him, yet it is one of the most precious promises and greatest assurances we have today:

John assures us by telling us that we ARE of God; such a great and awesome thought all by itself, but then goes on to tell us that we “have already overcome them,” because, “BECAUSE, greater is He Who is in you, than he who is in the world!” The Spirit of God dwells and abides in you and you abide in God Almighty! What greater strength and security can there be?! It is one of the greatest JOYS to know that we are abiding in and under the influence and protection of the Holy Spirit, God’s Spirit! When you truly come to the point in your life when you ABSOLUTELY realize that, there is a joy and peace, that the Bible states is beyond all understanding! (Philippians 4:7).

You see, the world system, those that buy into it, nurture it, are seduced by it and appear to prosper by it, think they are strong and that because of size and numbers, nothing can defeat it, but this is where the deception lies. The devil, the enemy of mankind’s soul has ALWAYS been a liar, cheat and deceiver. The Apostle Paul wrote the following confirming this very fact; “But even if our gospel is veiled, it is veiled to those who are perishing, whose minds the god of this age has blinded, who do not believe, lest the light of the gospel of the glory of Christ, who is the image of God, should shine on them.” – 2 Corinthians 4:3-4. “Whose minds the god of this age has blinded!” They ARE deceived and they don’t even know it. Jesus, Himself posed this question in the Gospel of Luke; “And He spoke a parable to them: “Can the blind lead the blind? Will they not both fall into the ditch?” – Luke 6:39. Isn’t that exactly what we see being played out in the world today? Can you imagine, to us as, you and I, true followers of Christ Jesus, just how much more obvious it is than even during John’s time?

The sad truth is though, and the Apostle spells it out; the world hears its own. Do you desire popularity, acceptance, recognition and acknowledgement? Many do and yet as I read somewhere a while back, “the approval of the world is not a testament to the truthfulness of one’s teachings!” John verifies this exact thought. Remember, John is still speaking of that spirit of antichrist that is one with the world. They are the most popular because they are saying what those in the world want to hear. Therefore, the world and those who are seduced and blinded by the world, WILL listen.

Hey, listen, part of my ministry is to not just teach, but to encourage and edify or lift up, the Body of Christ and its members of which I believe the beloved Apostle is addressing. I love to encourage. I love to leave my brothers and sisters in Christ with a smile on their face and some extra joy in their heart. That’s the best part of this type of ministry, in all honesty! But there is an underlying reason WHY I serve in that capacity; I encourage IN THE LORD, because the fact remains none of us is perfect. We stumble and make mistakes; yes, we still sin, maybe not so much in deed, but in oftentimes in thought and we STILL need to repent of those things that are NOT pleasing to our Heavenly Father. We HAVE been reborn and we are no longer in bondage or slaves to sin, but that doesn’t mean we still don’t tell “white” lies now and then, you know, to protect other people’s feelings and such! A lie is a lie and it’s sin and sin unrepentant has consequences! What about those few office supplies you took home that no one will miss. What about that bag of potatoes the local grocer forgot to ring up, did you go back and correct it? What about the bitter thoughts concerning that co-worker that keeps hitting that one nerve constantly? Do not be deceived, sin IS sin and unrepentant sin is death. But — we DO have an Advocate with the Father, we DO have an Intercessor that stands at the right hand of the Father and reminds the Father, they are mine Father, I have redeemed them, they WILL listen to the convincing of My Spirit, My Holy Spirit dwelling within them! (Romans 8:33-34). 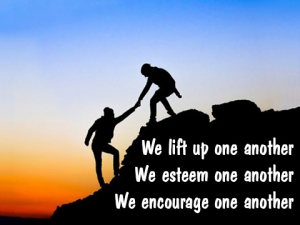 I told you all that for this one reason; we encourage one another, we esteem one another, we lift up one another, but we do it for the reason that we in ourselves are not perfect and in that imperfection, which HAS to be pointed out from time to time, in TRUTH and LOVE, is the reason for encouraging one another in the Lord! There is no reason to be encouraged AND at times admonished if we are already perfected!

But that is why John tells us that we have overcome. We have within us that spirit of God, His Holy Spirit who we listen too and hear. We don’t hear and listen to the world when it tells us it’s okay, it’s not like murder for instance, don’t fret it, you’re a GOOD person! Those in the world, those deceived by the spirit of this age, LOVE to hear that. They love to have their ears tickled, as it were!

“Therefore, if anyone is in Christ, he is a new creation; old things have passed away; behold, all things have become new.” – 2 Corinthians 5:17.

THEREFORE – because of, you being a new creation in Christ, your ability to hear the world’s lies has become dull, but now, you hear the things of the Spirit within you! What a marvelous transformation and promise! We are now of God and His Spirit and those who truly KNOW God, now hear us. They who know the purity and holiness of God, the love and grace of God, the truth and faithfulness of God, the authoritative word and prophecies of God, must know that we abide in Him and He abides in us; and thus, he who knows this will hear and listen to us, and abide with us.

But again, remember, those who are NOT of God will NOT hear or listen to us. Yet John reminds us one more time of this for a very important reason. You know in the past I have taught about the spiritual gift of discernment, being able to differentiate the truth from a falsehood and especially when appearances can be so deceiving; well the Apostle is touching on an aspect of this without actually coming out and saying this is what it is. Discernment comes because of the Holy Spirit within that we have been talking about when we speak of overcoming due to WHO is within us. What John is now saying is that when those who know God hear us, listen and abide with us compared to those who DON’T know God, who don’t hear us, listen and abide with us but rather listen to the world and the things of the world, then you are able to differentiate between the spirit of truth and the spirit of error. Remember, at the beginning of this Chapter we read what John wrote, “Beloved, do not believe every spirit, but test the spirits, whether they are of God; because many false prophets have gone out into the world.” – 1 John 4:1.

He IS reiterating that very thing here again. You WILL know the difference between the spirit of truth and the spirit of falsehood or error. “I, John, am giving you a clue: the people of the world who don’t know God, will not hear you. The people who know God, WILL hear you.”

I guess the thing that I most appreciate about John and his writing is that he makes a point and adds to that point and then when you least expect it, he goes back and more-or-less cements that first point. So in fact, you are always moving ahead several steps, but he’ll take a step or two back just to lay that foundation solidly before continuing on. I have actually heard and read some teachers who do not like that approach and yet for myself, I learn so solidly from that technique.

When you look at what is happening before our very eyes right now, in the world around us and not just in the United States where I live, but in the world, you can clearly see what the Apostle John is trying to encourage us in and prepare us for. There is nothing to fear, if you are a child of God’s, nothing at all and in fact, we should take great comfort in the fact that we have been forewarned. As that old Latin proverb goes, “forewarned is forearmed!” Knowledge truly is power. God’s children are never left unawares of His long-reaching plans and goals and especially when it affects His Kingdom and His heirs.

The world and the spirit of antichrist believes that it can leave God’s people, His children defenseless against their lies and deceit; and yet, we serve an Omnipotent and Omniscient Almighty Father who will NEVER leave us vulnerable!

Do NOT fear what you see around you, pray, indeed pray fervently and with resolve and do NOT forget to remember what Jesus Himself told us, “Now when these things begin to happen, look up and lift up your heads, because your redemption draws near.” – Luke 21:28.

Next post we will begin with 1 John chapter 4 verse 7.