“Let not your heart be troubled; you believe in God, believe also in Me. In My Father’s house are many mansions; if it were not so, I would have told you. I go to prepare a place for you. And if I go and prepare a place for you, I will come again and receive you to Myself; that where I am, there you may be also.” – John 14:1-3.

“And the first voice which I heard was like a trumpet speaking with me, saying, “Come up here, and I will show you things which must take place after this.” Immediately I was in the Spirit; and behold, a throne set in heaven, and One sat on the throne. And He who sat there was like a jasper and a sardius stone in appearance; and there was a rainbow around the throne, in appearance like an emerald. Around the throne were twenty-four thrones, and on the thrones I saw twenty-four elders sitting, clothed in white robes; and they had crowns of gold on their heads.” – Revelation 4:1b-4.

Continue on to read also Revelation 21:1-5, 9-23, and Revelation 22:1-5 for descriptions of the New Heaven and Earth and the New Jerusalem.

“But as it is written: Eye has not seen, nor ear heard, Nor have entered into the heart of man The things which God has prepared for those who love Him.” – 1 Corinthians 2:9, (Isaiah 64:4).

I truly hope that you took some time to meditate and think on the possibilities of God’s original Creation as it might have appeared to us without the shroud of sin to veil its beauty. Now understand, because we are of corruptible material and carnal we can’t begin to imagine how vivid, how bright, how crisp and clean the beauty might have been through sinless eyes. BUT – if your are born-again, your spirit has been renewed and the things that were meant for mankind’s pleasure can be viewed with a deeper beauty than those who have NOT been spiritually renewed!

While you’re thinking on these things, ponder this also; Adam and Eve lived in that beauty, without the veil of sin in the beginning. They saw things, the way God Almighty as their Creator meant for them to see. We do not know, how long they might have lived there in that sinless state before being tempted and falling from Grace!

With this thought in mind, we CAN assume that Adam and Eve COULD (not saying they did) have lived in the Garden for several decades before being cast out and then having to cope with the corruption that sin would finally take on their carnal bodies.

Now I laid this foundation for a reason; can you even begin to imagine the most beautiful place and site on earth and being an integral part of it, tending it, being an influence on its beauty and grandeur and then being cast out into what, by comparison, must have been desolate, strange and woefully dark, after experiencing unimaginable beauty?

I would imagine that it would be like someone who enjoyed luxury in their freedom one day, only to find the desolation of an 8×10 foot block cell in some prison! The contrast would truly be like the difference between day and night! So it was for Adam and Eve. To have the memories of that beauty and magnificence and then be cast away, never to see that again.

Remember this also, because of the way God created them in the beginning, sinless and without corruption, it took hundreds of years for sin to finally ravage their bodies and I would assume their minds and memories. So, the memories of that fall from Grace and the casting out of the Garden of Eden, must have been a terrible reminder to them most of the days of their lives!

But because God our Heavenly Father KNEW in advance and had the perfect plan, allowing Mankind (Genesis 5:2), the ability to continue to choose on their own, without force or constraint, Whom they would love or reject, He gave mankind a hope in the promise of an even more glorious future with Him!

So, though Adam and Eve by choosing to ignore God’s warning became the architects of our demise and corruption, God’s Wisdom and Mercy had a plan to use that failing to allow Mankind the opportunity to Love unconditionally, the way we were originally created to be, in the LIKENESS of the Lord Himself, not so much as in appearance, but in nature, character and attributes. We have IN Him, the ability to love like Him, without condition, but it took Christ to pay the price for our disobedience to open the door to the relationship with the Father that would allow us to express that kind of unconditional love!

This is where the glorious hope for a beautiful future comes in. When we accept the Gift of Christ and again establish a relationship with our Heavenly Father THROUGH Him, Christ Jesus, we are assured and guaranteed a place prepared for us as children and heirs to the Father!

The Word of God gives us glimpses, yet our minds are still shrouded behind a veil, as the Apostle Paul describes it, “like looking through a mirror darkly!” (1 Corinthians13:12). He’s speaking primarily about Love, true, unconditional love, but he is also describing what I like to call a spiritual principle. Being IN the natural, we cannot see the spiritual clearly, but only dimly right now and only for a season. One day, the veil WILL be lifted and we shall see with the spiritual eyesight for which we were ultimately created to see with. 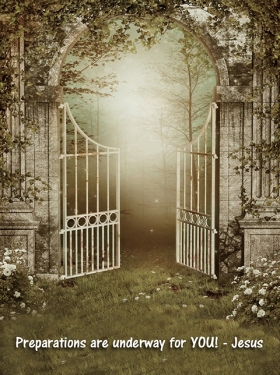 But one thing the Lord DID create in us when He created us in His likeness is the ability to imagine beyond ourselves. This is why as mankind we have a creative drive. It will never be the same as the Lord’s but the attribute TO create is definitely inherent and that extends to our imaginations as well and all the more so when we have been spiritually renewed!

If you have read the Scriptures in Revelation that I put forth for you above, then you can begin to at least imagine the beauties that are in store for us when we finally go to be with the Lord. And, it doesn’t sound like it is going to stop there. Like the Prophet Isaiah and the Apostle Paul stated, “man’s eyes, his ears or even his imagination cannot begin to comprehend what the Lord HAS already prepared for those that love and are waiting on Him!” We can try, we can speculate, but it will always be a shadow of what is truly waiting for us.

Mankind has a fascination with precious metals and jewels, such as gold and silver, diamonds and emeralds, etc., yet if you really look at what the Scriptures are telling us about the extravagant beauty of these things in Heaven, though they are precious to man here on earth, in Heaven they will be nothing more than construction materials. Materials with which to walk on and provide shelter. In other words, the real treasure is NOT what is so valuable to man in the natural. The real treasure is going to be Oneness with the True Light of the World, the relationship we can only imagine with the King of Kings and Lord of Lords!

Back in the 70’s soon after I was saved, I was confronted with what I have come to know as a religious fad, a deceptive and false teaching known as prosperity teaching. Now understand something, as I stated in Part I, I was born-again in 1969 and so I was still learning the Word of God, but I can tell you by looking back on that time, that even then, the Holy Spirit was protecting and guiding me for I had such an uneasy time, sitting under those that were teaching that “since my Father owns all the hills and all the cattle on those hills and all the ‘taters under those hills and I’m an heir, it all belongs to me!”

The true Gospel of putting your treasures where moth and rust can’t destroy it was replaced with the false narrative that God WANTS you to be rich to prove to the world that you’re a King’s kid! There are still those preaching and teaching that today and to be honest, in the spirit, it sickens me that so many are falling prey to such deception! It feeds the lust of the flesh, the lust of the eyes and the love of the world. Just like in the Garden of Eden, that cunning and deceptive servant is repeating his lies; “But has God truly said that you should NOT garner riches while here? Because if you do, you can be a better testimony to the world! Think of all the people you could help.”

My question is this, “What about the treasure in the Gospel, the Good News of Jesus Christ and the FREE gift, He is giving. Not a costly gift made or purchased with human hands but an ETERNAL gift that no money can buy!”

My treasures are being hinted at in the Book of Revelation and the Gospel of John. Not that I am looking for a mansion, because I’m not; but I am looking for the Light that will never stop shining and being able to be One with that Light. I can only BEGIN to imagine what that will be like, but Jesus promised it to all of His followers!

“Holy Father, keep through Your name those whom You have given Me, that they may be one as We are.” – John 17:11b.

I started out this lesson in Part I by saying that “beauty is in the eye of the beholder,” and that is true. I love the beauty of scenic creation all around me and I probably always will. But there is going to be another kind of beauty that we can only begin to speculate on. Our carnal imagination will only be able to take us just so far, but the more we meditate on “those things that are above and not below, those things that are pure, honest and true, those things that are lovely and just,” (Philippians 4:8, Colossians 3:2), the more our imagination will delve into the spiritual things that are being prepared for us and the more chances we have that the “dim mirror” will become less dim the closer to eternity that we get.

We see pictures and paintings of the assumed portrait of Jesus by many artists all around us and we have over the years garnered a traditional image that is probably so far from the truth of what He did look like, and light-years away of how we WILL see Him in eternity. Our carnal and natural eyes today could not look upon the beauty of the King of Kings and Lord of Lords. We WILL HAVE to be renewed incorruptible to be able to look upon the beauty and glory of our coming King and Redeemer.

In the meantime, I will continue to speculate and stretch my imagination to the possibilities of those things He has prepared for us and to the glorious day when we finally get to see Him face to face!!