When You Pray, Pray This Way – Part II

Let’s continue on from Part I to look at the SPIRIT of “The Lord’s Prayer”: 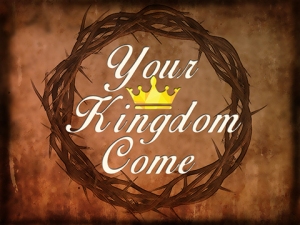 Your Kingdom Come —– Your Kingdom Come, denotes the place where You have personal rule and have supreme domain, the place where Your Law, Your edicts, Your plans, Your Will not just reside, but emanate from. This is the place where You and You alone as God Almighty are the ultimate Ruler, ultimate King, without question having total and absolute authority! Let them advance or proceed from Your Throne where You govern, and allow them to advance to/towards us. By remembering this, we acknowledge His rule, His Lordship, but we also remember in this acknowledgment that we are a part of that very Kingdom, for in truth, His Kingdom is everywhere that He resides and He DOES reside everywhere! Therefore, His absolute authority is everywhere and we are subject to that authority. He IS our authority as Father, but even though we are His children, we are his subjects as well.

Your Will Be Done on Earth as it is in Heaven —– When we ask the Lord, out of our Love for Him and not out of obligation, as future heirs and present-day children of God Almighty, to let His Will be done where we now reside, in the natural realm, because we KNOW that is how His Will operates in Heaven, in the Eternal, we are SURRENDERING our wills, desires, plans, wishes, etc., to the One that we KNOW is more loving, more intelligent, more wise and we acknowledge that He has our best interest in mind, because He IS our Heavenly Father!

For too long man’s will has taken precedent over the Lord’s will and we are just shy of completely destroying this island we call earth! Man’s will has not advanced our position in the Eternal even momentarily. It is only by totally surrendering our will and acknowledging that our Heavenly Father, God Almighty is wiser and has our BEST interests at heart that we actually can become the “heirs to the Kingdom” that our Heavenly Father wants for each of us!

It has been stated in many articles recently that when we ask the Lord to “let His will be done,” in relation to prayer and communion, that it is because we lack faith, or we do not know His plans or “will” for our future or His desires concerning certain events taking place in our lives.

But here is the thing; we can and should be communing with our Heavenly Father on a daily basis already, but just because we are, doesn’t mean that He will be divulging all His plans for us in specific detail, or that if we don’t know what tomorrow holds for us, it is a lack of faith. The very fact that we still need to TRUST in Him for tomorrow and the very fact that we can still say in our prayers, “thy will be done,” is the act of faith that the writer of Hebrews states allows us to “please God,” for as it is written, “But without faith it is impossible to please Him, for he who comes to God must believe that He is, and that He is a rewarder of those who diligently seek Him.” – Hebrews 11:6. 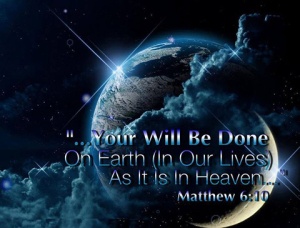 This is speaking directly about communing with God Almighty in that it states those who “diligently seek Him.” We do that in communication and ESPECIALLY when we believe that our answers, (whether yea or nay) and our rewards come FROM Him and that He is indeed God, and they (the answers and rewards) are His will and His will alone! If you take away our reliance upon what He holds for us in the future, and the TRUST needed to believe that He has our best ETERNAL consequences at heart, then we can NO LONGER please Him because faith would not and is not any longer needed.

When God appeared to Abraham and told him that his wife Sarah would bear children, God divulged to Abraham his general plan for his life. BUT – God did NOT divulge specifics because if He had, Abraham would not have to “practice” faith in God’s Word, all he would have to do would mark off the calendar until the specific time arrived! We see in the news today, just what happens when we don’t move in the direction of “thy will be done,” but take it upon ourselves because we THINK we know God’s plan for the moments still in front of us. Abraham’s rush to fulfill God’s promise out of God’s time has created a centuries old feud that will NOT disappear until Christ Jesus returns!!!

Jesus Christ Himself put His very own words into practice at the Garden of Gethsemane when He asked His Father to take away the “cup” that He would soon partake of. Jesus KNEW His mission, (His job, to put it crudely) and KNEW that He HAD to go voluntarily to the Cross until the very end, yet, because as a man, He wanted to avoid the suffering and pain, etc., He asked if it were at all possible, crying out to His Father “saying, “Father, if it is Your will, take this cup away from Me; nevertheless not My will, but Yours, be done.” – Luke 22:42.

So, when you pray, you are making a statement of faith concerning your acknowledgement of God’s greater will over yours, you are asserting His Kingdom to be accomplished here on earth, and you are subjecting yourself under Him as your Father and you are letting Him take the reins of your life trusting that He WILL fulfill His promises and that He WILL illuminate your footsteps and direction!

Do NOT get trapped in these New Age fads that turn simple, God pleasing faith into some “magic” formula where you will receive what YOU want despite God’s Wise and Eternal Will! This type of religious fad has infiltrated the organized church establishment and has only led to confusion, heartache and disbelief; ALL tools of the enemy of your soul! Not everything that SEEMS or sounds right, IS right, and you NEED to discern the truth from the lie and deception and especially in the age we live in right now! 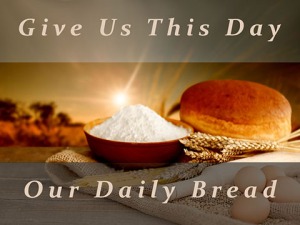 Give Us This Day Our Daily Bread —– We have a right, as acknowledged heirs, of our Heavenly Father Who created us and also created the means for our survival and existence, to ask individually and personally for those necessities that determine that very existence and survival for the here and now and to do so on a day by day basis. Jesus shows us this is not selfishness, but rather this also is another expression of our faith, for what child would ask something of their Father and NOT expect to receive? This is another area in which we are pleasing our Heavenly Father, because we are asking in faith, not just believing, but KNOWING that His promises include our daily sustenance, etc.

Notice also that Jesus is not telling us to ask for tomorrow’s bread! The following is Jesus actually explaining further to the disciples WHY we do not have to worry about what we ask of the Father in His (Jesus’) own words:

Matthew 6:25-33, “Therefore I say to you, do not worry about your life, what you will eat or what you will drink; nor about your body, what you will put on. Is not life more than food and the body more than clothing? Look at the birds of the air, for they neither sow nor reap nor gather into barns; yet your heavenly Father feeds them. Are you not of more value than they? Which of you by worrying can add one cubit to his stature? So why do you worry about clothing? Consider the lilies of the field, how they grow: they neither toil nor spin; and yet I say to you that even Solomon in all his glory was not arrayed like one of these. Now if God so clothes the grass of the field, which today is, and tomorrow is thrown into the oven, will He not much more clothe you, O you of little faith? Therefore do not worry, saying, ‘What shall we eat?’ or ‘What shall we drink?’ or ‘What shall we wear?’ “For after all these things the Gentiles seek. For your heavenly Father knows that you need all these things. But seek first the kingdom of God and His righteousness, and all these things shall be added to you.”