Jeremiah has been called to warn the people of Israel. When you read Jeremiah, if you substitute the United States for Israel, you will realize that the Book of Jeremiah is not just historical, but extremely and divinely prophetic. Jeremiah, except for certain verses is rarely taught on today and yet, with the state of the United States as a Nation, we NEED, we MUST take the words of Jeremiah to heart!

Israel was (and still is) God’s chosen children. His first-born as it were. As Christians we have been adopted or grafted in to Abraham’s seed as promised by the Lord. As much as the Lord loves His children, He also has to discipline them, being a just and holy God. The U.S. was founded AND was blessed and prospered under the “banner” of Christian and Biblical principles. We have been blessed as God’s child, yet today and for some time now, many of the leaders of the U.S. feel God is obsolete and archaic. He is NOT progressive enough and as the leaders go, so goes a nation as proof in the Old Testament writings about Israel. When the leaders did right in the sight of the Lord, the people did right and the nation prospered. When the leaders sinned in the sight of the Lord, the people followed suit and God, the Father had to discipline them as unruly and rebellious children and they did NOT prosper.

I know I have stated this many times, but with a God whose Character and Word is from everlasting to everlasting and does not change, what makes us as adopted sons and daughters, as a Nation, mind you, think we can escape the same discipline for our rebellion and outright sin? The ONLY thing keeping this Nation “afloat” right now is the prayers and deeds of the righteous resulting in the Father’s blessings on His TRUE children, flowing from them to those who still choose to live unrighteous lives and outright deny the sovereignty of God Almighty! That however, will not last forever. Though God IS truly longsuffering, His justness and uprightness will not allow the Nation who lives under His Name to go undisciplined. 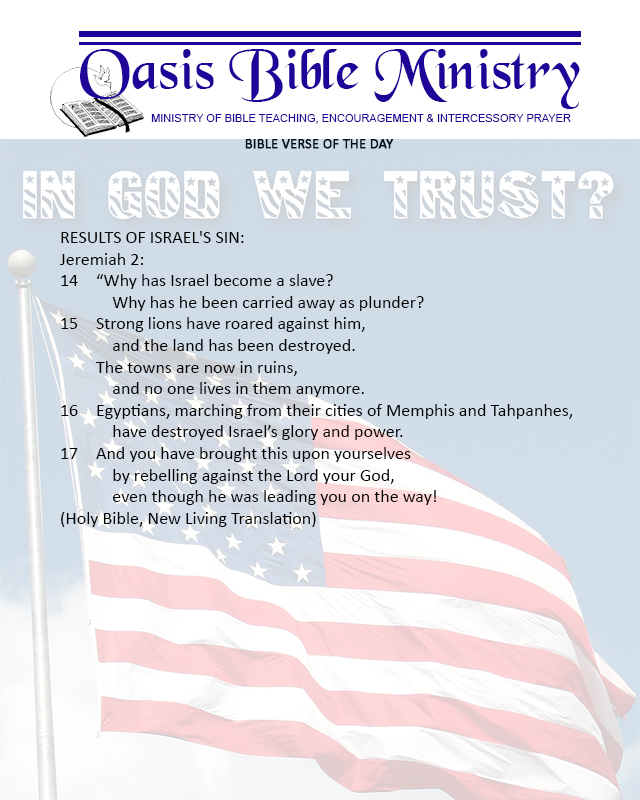