The Lord Questions His People

Jeremiah has been called to warn the people of Israel. When you read Jeremiah, if you substitute the United States for Israel, you will realize that the Book of Jeremiah is not just historical, but extremely and divinely prophetic. Jeremiah, except for certain verses is rarely taught on today and yet, with the state of the United States as a Nation, we NEED, we MUST take the words of Jeremiah to heart!

How quickly we as people and yes as a Nation forget the blessings and prosperity that we have received from the Lord! Our Nation was founded on Godly principles when those who chose to follow after God Almighty voluntarily wanted to escape from an oppressive nation (at that time) that demanded religious worship according to that nation’s dictates. God honored those early pioneers and pilgrims, though they faced hardships and death to attain what they desired from the Lord, this Nation, the United States of America was founded.

But today, we have torn down the Godly reminders all in the name of “political correctness” while abandoning the very precepts on which this Nation was founded. The very Document, our Constitution, based on Biblical concepts of liberty, individual choice and honor to our God is deemed by many in our country to be old and archaic and something to be changed or removed in the name of progressiveness.

The Lord must be asking us as American Citizens the same question He asked all the families of Israel. “What was so wrong with my blessings from the past that you would discard them and replace them with your own idols? When did celebrities and sports figures and politicians AND the love of monetary gain become just part of your gods to replace Me?”

When we as a Nation turn away from the very claims that we still have emboldened on our currency, “In God We Trust” and when we claim to still be a Nation under the protection and blessing of God Almighty, what makes ANYONE think that what God states to His rebellious children of the past, He won’t state to His adopted children of today, as a Nation, when the Word tells us that “God does NOT change?” 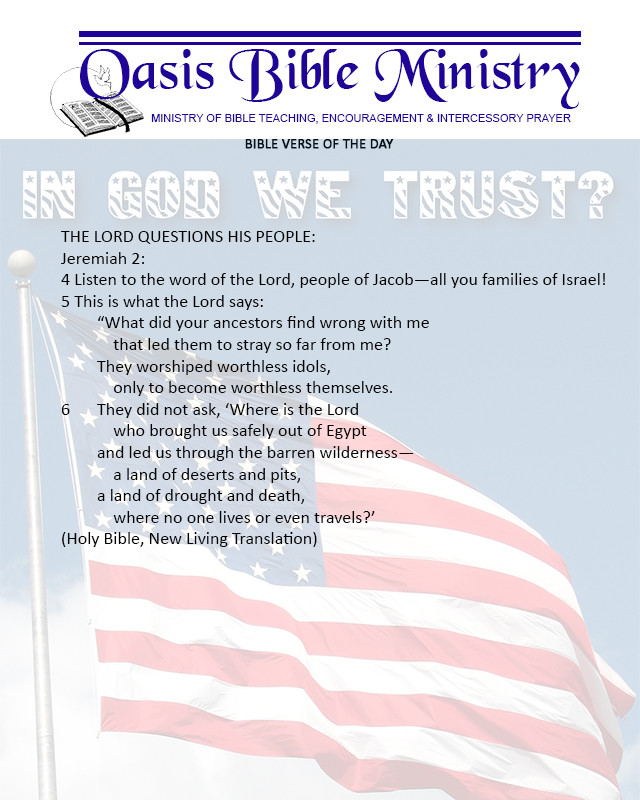