With all that is going on in the United States as of this date, January, 2020 we need more than ever to pray for our country as a nation and our leaders! We see a dramatic attempt to do away with the Constitution of this country and the ones doing it are those who claim to be preserving it. BUT – the prayers of many have gone forward asking the Lord to bring forth from the darkness into the Light those deceitful deeds being done in the dark and our prayers ARE being answered dramatically. What happens to this country as a nation is in the hands of an Almighty God Who is a Spiritual Father to many in this country. God’s children WILL be taken care of, but woe to them that want to destroy the foundation for which this country was birthed! The following is presented as a remembrance of what so many hold/held so dear for so long! We need to pray fervently and pray continually for the spiritual well-being of this country we call home! – Pastor Roland Ledoux

*That the founding Fathers of America wrote the Constitution of the United States of America to guarantee Freedom of Religion, Not Freedom From Religion.
The First Amendment of THE BILL OF RIGHTS was enacted to guarantee this.
As you walk up the steps to the building which houses the U.S. Supreme Court you can see near the top of the building a row of the world’s law givers and each one is facing one in the middle who is facing forward with a full frontal view . . . it is Moses and he is holding the Ten Commandments! 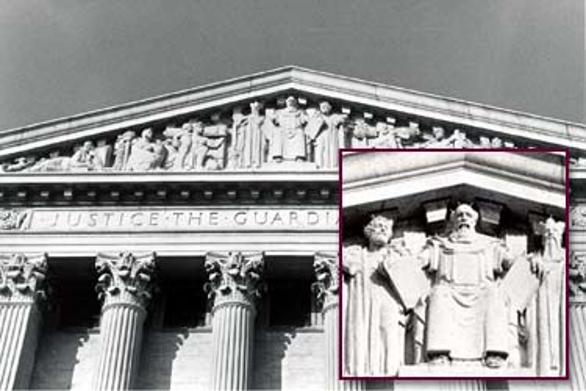 As you enter the Supreme Court courtroom, the two huge oak doors have the Ten Commandments engraved on each lower portion of each door.

As you sit inside the courtroom, a display of the Ten Commandments is on the wall right above where the Supreme Court judges sit!

There are Bible verses etched in stone all over the Federal Buildings and Monuments in Washington, D.C.

Patrick Henry, that patriot and Founding Father of our country said: “It cannot be emphasized too strongly or too often that this great nation was founded
not by religionists but by Christians, not on religions but on the Gospel of Jesus Christ.”

Every session of Congress begins with a prayer by a paid preacher, whose salary has been paid by the taxpayer since 1777.

Fifty-two of the 55 founders of the Constitution were members of the established orthodox churches in the colonies.

Thomas Jefferson worried that the Courts would overstep their authority and instead of interpreting the law would begin making law . . . an oligarchy . . . the rule of few over many.

How then, have we gotten to the point that everything we have done for more than 240 years in The United States of America, is now suddenly wrong and unconstitutional? This nation AND the world needs to see and remember what this great country was built upon.

It has been said in the near past that 86% of Americans believe in God. Therefore, it’s very hard to understand the big fuss over having the Ten Commandments on display, “In God We Trust” on our money, and the reference to God in the Pledge of Allegiance. Maybe it’s time the rest of us, stand up and DEMAND what is rightfully ours and not let the weak minority dictate to us what IS our God-given rights! What does it mean?

It means that the State is to have nothing to do with the enforcing of religion by its laws and that the Church is not to go to the State to have its religion/beliefs enforced by State Law. It doesn’t mean that the State cannot involve itself in religion and practice religion – it is only prohibited from enforcing religion by law.

The first amendment of The Bill Of Rights of the United States of America states that “Congress shall make no law respecting an establishment of religion, or prohibiting the free exercise thereof; or abridging the freedom of speech, or of the press; or the right of the people peaceably to assemble, and to petition the government for a redress of grievances.”

Does this mean that the State can’t practice, encourage, and or support religious beliefs? No, it doesn’t mean that. It means that it is not to make laws respecting religion and religious beliefs; the establishing of or the prohibiting of religion. They can encourage or discourage religion all they want, as long as they don’t make laws to accomplish it.

Liberals have however, and are pushing to make laws that prohibit religious practices and beliefs. This is totally going contrary to the first amendment. There is nothing in the Constitution or Bill of Rights that states that there is to be a separation of Church and State. It simply states that the government is to make no laws having to do with the establishment of religion, or prohibiting the free exercise of religion. Although neither the Constitution or Bill of Rights refers to the a separation of Church and State, the principals regarding it are definitely there.

In conclusion, the laws and bans that prohibit the free exercise of one’s religious beliefs are in violation of the first amendment and are contrary to everything that the Founding Fathers of the United States of America stood for and believed.

It pays to know the Constitution and the Declaration of Independence! Knowledge IS power and those that want to remove that power from “we the people” want the people to remain in ignorance, thus the lack of legitimate History, Civics and Social Studies in our schools! Something to think upon!

*I in no way take credit for this. This has been passed around the internet for many years. Only the opening statement is mine. It has been said in some articles this was from the late, great radio and television writer Andy Rooney, but verification has not been absolute. Credit DOES go, to whomever DID write it with much thanks and appreciation!

1 Response to Did You Know?