Two guys are walking through a game park & they come across a lion that has not eaten for days. The lion starts chasing the two men. They run as fast as they can and the one guy starts getting tired and decides to say a prayer, “Please turn this lion into a Christian, Lord.”

He looks to see if the lion is still chasing and he sees the lion on its knees. Happy to see his prayer answered, he turns around and heads towards the lion. As he comes closer to the lion, he hears the it saying a prayer: “Thank you Lord for the food I am about to receive.”

One night a lady came home from her weekly prayer meeting, found she was being robbed, and she shouted out, “Acts 2:38: ‘Repent & be baptized & your sins will be forgiven.'” The robber quickly gave up & the lady rang the police. While handcuffing the criminal, a policeman said, “Gee mate, you gave up pretty easily. How come you gave up so quickly?” 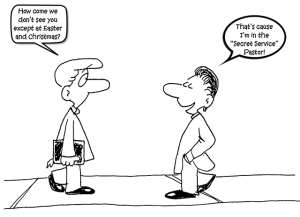 A friend of mine was in front of me coming out of church one day, and the vicar was standing at the door, as always , to shake hands with the worshipers. He grabbed my friend by the hand and pulled him aside. The vicar said to him, “You need to join the army of the Lord.”

My friend replied, “I’m already in the army of the Lord, Father.”

So the vicar inquired, “Then how come I only see you at Christmas and at Easter?”

My friend whispered back, “I’m in the secret service.”

Three Pastors in the south were having lunch in a diner. One said “Ya know, since summer started I’ve been having trouble with bats in my loft and attic at church. I’ve tried everything–noise, spray, cats–nothing seems to scare them away.

Another said “Yea, me too. I’ve got hundreds living in my belfry and in the narthex attic. I’ve even had the place fumigated, and they won’t go away.”

The third said, “I baptized all mine, and made them members of the church . . . Haven’t seen one back since!!!”

One balmy day in the South Pacific, a navy ship espied smoke coming from one of three huts on an uncharted island.

Upon arriving at the shore they were met by a shipwreck survivor. He said, “I’m so glad you’re here! I’ve been alone on this island for more than five years!”

The captain replied, “If you’re all alone on the island why do I see THREE huts.”

The survivor said, “Oh. We’ll, I live in one, and go to church in another.”

“What about the THIRD hut?” asked the captain.

“That’s where I USED to go to church.”

Pastor of Oasis Bible Ministry, an outreach ministry of intercessory prayer, encouragement and exhortation of the Word of God and author of the ministry blog, For The Love of God. I live in Delta, Colorado with my beautiful wife of 47+ years and a young yellow lab whom we affectionately call Bella.
View all posts by Roland Ledoux →
This entry was posted in Church Humor and tagged A Cheerful Heart, A Joyful Heart, A Merry Heart, Army of the Lord, Axe and Two 38's, Bats in the Belfry, Chuckle, Church Humor, Clean Humor, Clean Jokes, Funnies, Funny, Happiness, Humor, Hungry Lions, Jokes, Joy, Laughter, Laughter is Like a Medicine, Merriment, Mirth, Religious Humor, Shipwreck Survivor, Smile, Time to God. Bookmark the permalink.
%d bloggers like this: